On Thursday 9 February at about 10pm, a house in the village of Burin near Nablus was attacked by settlers. Approximately 50 armed settlers approached a house near the edge of the village and threw stones and rocks at the inhabitants, shouting at them to get out of the house. Young men in the village were alerted and came to the assistance of the family. 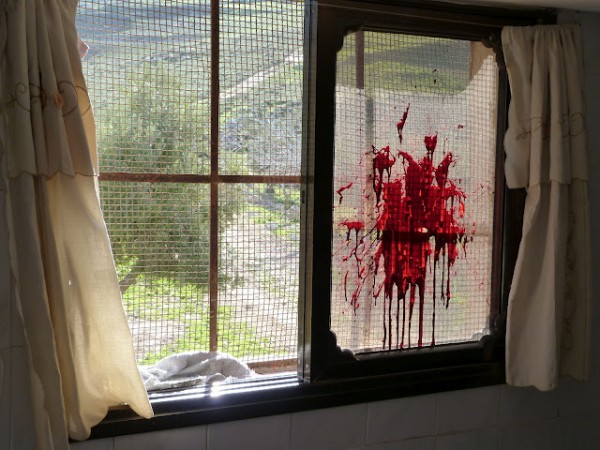 When they arrived the settlers backed off, but soon after 15 jeeps of Israeli soldiers arrived and used flares, teargas and sound bombs to attack the Palestinians defending the house. The attack lasted until about midnight, the settlers staying there with the soldiers. Burin villagers were unable to do anything to defend themselves and their village except throw stones – and even this was difficult in the dark.

Later that night, at about 1am, a house on the other edge of the village was attacked by another group of settlers. They rolled burning tires down the hill towards the house, filling it with acrid smoke. Hanan Nasser who lives in the house with her family said that she was asleep when someone from the village called them to say settlers were attacking. They gathered on the roof of the house and could hear the settlers shouting. About 6 to 10 burning tires were directed at their house, but came to a stop a short distance away. The family was concerned about the effect the smoke from the tires might have on Hanan’s daughter who is pregnant.

Hanan’s house is very close to the illegal settlement of Yitzhar, and they have suffered innumerable attacks from settlers over the last 10 years. In 2002 when her husband built the house, it was set on fire by settlers. Her husband suffered a heart attack and died from the shock of seeing his house on fire. Since then settlers have set fire to the house twice more, poisoned sheep, regularly burn their olive trees and injured her son by throwing a stone at him. Just two months ago they threw paint in a glass container at the house – the metal mesh on the windows prevented any serious damage or injury, but the angry red paint on the bathroom windows is a daily reminder of the settler threat.

Burin is a village of about 3,000 people and sits in a valley between the illegal settlements of Bracha and Yitzhar. There is a further outpost above the village, and it is thought that the settlers who attacked the first house had come down from there, possibly because building had begun on a new house there that day. The settlers regularly come and cause aggravation in the village – usually about once a week, but it had been fairly quiet until last Thursday. Israeli soldiers come much more often, raiding homes and arresting people. Also on Thursday night they raided homes close to Hanan’s home, just up the hill towards Yitzhar. The soldiers inspected one young resident’s shoes for mud, suggesting that this indicated they had been in the settlement, though his house is surrounded by muddy fields.

These settler attacks were the first to happen so late at night in Burin, though the soldiers often raid Palestinian homes in the middle of the night. Unfortunately the residents of Burin felt that after a quiet few weeks, Thursday’s attack may mark a fresh wave of them as the weather gets warmer.

Veronica is a volunteer with International Solidarity Movement (name has been changed).