Resistance continues, demonstration in the No Go Zone 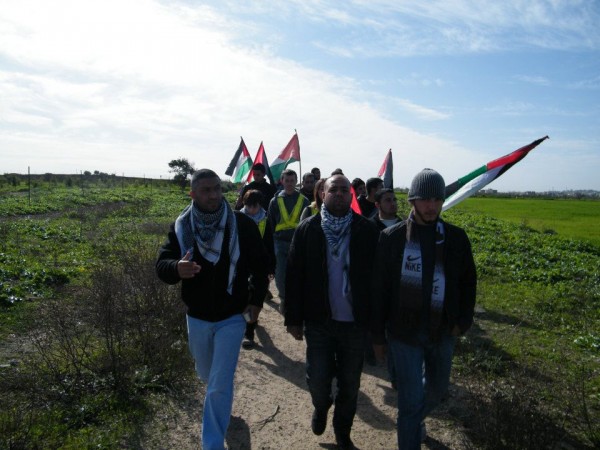 The No Go Zone – Click here for more images

Every Tuesday we gather in front of the Beit Hanoun Agricultural College, members of the Beit Hanoun Local Initiative, the International Solidarity Movement and other activists from all over Gaza.  We gather, and we march into the no go zone.  Sometimes we are shot at, sometimes there is no response.  We accept both of these.  We cannot control when the Israeli’s will shoot at us, at unarmed civilian demonstrators on their own land.  We are not discouraged by the appearance that nothing changes, you never know when change will happen, but you can be sure that if you do nothing, nothing will change.  So every Tuesday, we march into the no go zone, the rest of the week, everyone struggles against the occupation in their own way.  Teachers teach, farmers farm, fisherman fish, but under occupation all of these things can become revolutionary things, life itself can become a revolutionary act.

The megaphone announces the start of the demonstration; Bella Ciao is our marching song.  We set off down the road into the no go zone.  There about thirty of us, men, women and children, somehow, it feels like more this week.  We do not take the usual path into the no go zone, once inside the no zone we turn to the left.  We walk toward the road that leads to Erez, one of the few gates into and out of the prison that is Gaza, few Gazans are permitted to use it, it is mostly for NGO workers.  We stop about twenty meters from it; we plant a flag in the ground.  This flag joins the others we have planted in the no go zone, unlike wheat which requires months to go grow and is inevitably destroyed by the periodic assaults of Israeli bulldozers in the no go zone flags can be planted fully grown.  Eventually Israeli bulldozers will come and grind them beneath their wheels and we will have to plant new flags to replace them, but until then you can see our flags wave over the no zone.  The wall that surrounds Gaza is studded with Israeli flags, in case anyone should forget who it is that imprisons Gaza.