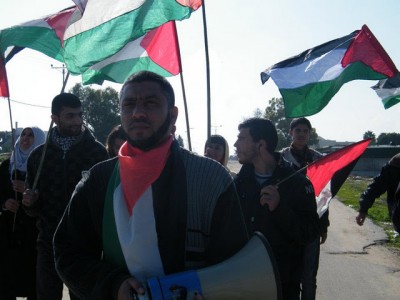 On Tuesday there was another demonstration in Beit Hanoun against the “buffer zone” imposed by the Israeli army in the Gaza Strip. The demonstrators also commemorated the over 1400 Palestinians killed during operation “Cast Lead”.

The demonstration started at about 11.00 am. A drone was flying over Beit Hanoun.

The volunteers of the ISM and other youth marched until they were only a few meters from the separation barrier, singing songs, among them the Italian “Bella Ciao”, and waving Palestinian flags.  During the march, they heard gunshots from Israeli soldiers.  Saber Zaaneen and other young men placed a Palestinian flag in the land.

At the end of the demonstration, Saber answered some questions.

Why do you demonstrate every week in Beit Hanoun?

There is also a “no go zone” in the sea. The farmers and the fishermen are both oppressed by the “no go zone”.

This last demonstration had a special meaning. Today Gaza doesn’t kneel and doesn’t submit. Gaza did not raise the white flag. Gaza is still strong. Three years ago the state of Israel launched an attack on Gaza. For 23 days they used every weapon on us. They used planes, tanks, guns, missiles, bulldozers and white phosphorus. They wanted to destroy the resistence and Hamas. They did not succeed. They destroyed houses, they bombed  schools, UNRWA buildings. They massacred the Samouni family, the Idaaya family, the Abed Aldayem family, the Deeb family, the Ayel family and many others.

You placed a Palestinian flag at the border, why?

For three years we have had this demonstration in the buffer zone, so we thought today to do something  new. In the last demonstration we marched into the buffer zone and we reached an area that Palestinians haven’t reached since May 2000. I was happy to see today the flag in the same area.

How was the Beit Hanoun Local Initiative born?

It was born in September 2007, from the suffering of Palestinians under Israeli attacks. The main reason was  the killing of 18 children in Beit Hanoun, some of them were in school at the time.

We started to demonstrate in the name of our children that Israel killed at that time. It was  my idea to set it up. Our name is Volunteers for Human and Social Service. We have a psycological support group for the children and the mothers. We visit families, helping them, to harvest their lands. During Israeli attacks we help and provide first aid for injured people.

We also have a group that dances Dabka during Palestinian celebrations. Besides this, we organize events on important days every year: on Land Day, on the 30th of March, working with farmers. On the 15th of May, Nakba Day, we planted tents in the buffer zone to reflect the condition of the refugees.

How can this conflict end?

There are some decisions from the UN that could end this conflict if they would be applied. This  conflict could end if they give to the Palestinians the lands they had until 1967, but the problem is that there is still no justice in the world. The United States and Europe still support Israel, they could end this conflict if they apllied those UN decisions. Despite all the suffering Palestinians have endured for 63 years and all of the killings, the Palestinian people still fight to have freedom and justice. Our message is a request for freedom, justice and peace in Gaza and all Palestine.»

The illegal buffer zone was established 50 meters from the border, inside the Gaza strip, according to Oslo, and since then it was extended by Israel to 300 meters and in reality it often reaches 2 kilometers, preventing  Gazan farmers from working on their lands.