“The Israeli military say they are the most moral army in the world, but they killed my daughter, they didn’t respect her right to live” 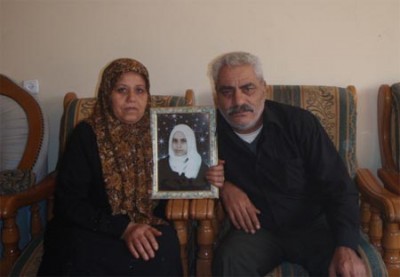 I’tidal and Ahmed Abu Oda with a picture of their daughter Nariman Abu Oda (Photo: Palestinian Centre for Human Rights)

On 9 January 2009, the Abu Oda household in the Al Amal neighbourhood of Beit Hanoun came under sustained fire from Israeli positions close to the Gaza-Israeli border 2 kilometres away. Nariman Abu Oda, 16, was hit in the right side of her body by Israeli fire as she was walking from the hallway, where the family were taking cover, to the kitchen. Medics were unable to reach the family and Nariman died before she could receive medical attention.

The pockmarked concrete walls of the Abu Oda household tell a good deal of the story of Nariman’s death. Despite the best efforts of father Ahmed Abdel Kareem Muhammad, 57, and mother, I’tidal Abd al Aziz, 53, to plaster over the patch work of holes and indentations in the walls, ceiling, floors and doors, the house remains riddled with bullet holes. As I’tidal explains “it is clear the shooting was completely indiscriminate.”

Nariman’s mother and father keep returning to the question, why did this happen? For them, it is not an empty rhetorical question, but one that holds a great deal of weight and a great deal of their concern. “Why my daughter? What were their motives? What were their reasons?” asks Ahmed. “The Israeli military say they are the most moral army in the world, but they killed my daughter, they didn’t respect her right to live.”

The Abu Oda family find themselves caught in a deep state of mourning regarding Nariman’s absence, yet at the same time feel her constant presence. Recalling that Nariman used to make him his coffee in the morning, Ahmed says that, he still absentmindedly calls for Nariman when he wants coffee or tea. “Her room is still exactly as she left it three years ago, with everything still in its place.” Despite this, the family are desperately seeking to move; “we do not want to live in the house that Nariman was killed in,” says Ahmed. Adding to the sense of presence Nariman has in the house, I’tidal and Ahmed’s children Shadi, 34, Abdel Kareem, 32, and Sahar, 30, have all since had daughters whom they named Nariman, in the memory of their younger sister.

I’tidal was deeply affected physically and mentally by the loss of her daughter who used to help her a lot with daily household chores. “When I see young girls going to school I imagine her with them, I see her in every room of the house, I will never forget her. After the incident I was admitted to the hospital for ten days due to shock” recalls I’tidal, “since then I have suffered from huge physical problems resulting from stress.” I’tidal has health complications relating to blood pressure, heart disease and diabetes.

The family did not only lose Nariman during the Israeli offensive, but also their livelihood. The family had a citrus grove and a poultry farm that were totally destroyed during the attack and have another farm that they cannot reach due to its proximity to the Israeli imposed buffer zone. The family have recently planted seedlings in one of the destroyed farms again but are still waiting to harvest them. However, the loss of income from the farms is mentioned merely as an afterthought to the loss of Nariman. “We care nothing for the loss of our land compared to the loss of our daughter” says Ahmed.

Speaking of the future the couple are desperately seeking answers and demand accountability. “I don’t expect the case to be successful, they will change the facts, the only thing I want is to address the soldier who killed my daughter” says Ahmed. “But I hope one day that we can reach peace with the Israeli’s and end the war and the killing.”

PCHR submitted a criminal complaint to the Israeli authorities on behalf of the Abu Oda Family on 30 August 2009. To-date, no response has been received.