“Can I go to a court to restore my sons? No” says Mohammed. “What is the point in bringing the soldiers who killed my sons to justice when there will simply be more and more after them? When others will lose their sons as well? Soldiers commit these crimes because they know they have immunity.” 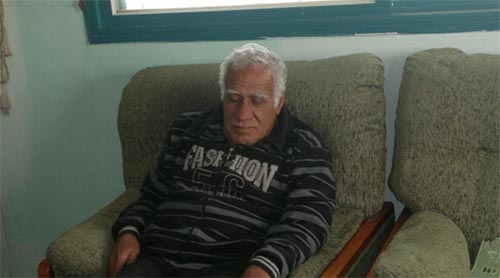 On 16 January 2009, Israeli forces positioned in the al Fukhari area, south east of Khan Younis, opened fire on the vehicle of Mohammed Shurrab and his two sons Kassab, 28, and Ibrahim, 18, as they were travelling back to their home during the Israeli-declared ceasefire period. Mohammed was injured and crashed the car,  his two sons were subsequently shot as they left the car. Israeli soldiers refused to allow medical access to the area, and Kassab and Ibrahim bled to death on the scene over a number of hours. There were no military operations in the area at the time.

For Mohammed Shurrab (67), life since the death of his sons has been a contact battle to fight back the memories of the day. “I try to keep busy in every moment. I read 4-5 hours every day. These books you see on my wall have all been read 2-3 times each. The rest of my time I work on my farm, tend to my crops and care for my live stock”, says Mohammed, pointing to the two new born sheep that arrived only two hours beforehand. Despite his best efforts to distract himself, however, Mohammed seems resigned to a life of remembering. “Until I get buried bellow the soil I will continue to suffer, agonising over my sons.”

Mohammed is adamant that he hopes that time will come sooner rather than later, “everyday I hope to join my sons. The only question is how I do so. I am a religious man and believe in God, taking my own life would be against my beliefs, but I believe it’s better for me to join my sons. I am waiting to die.”

His farm, which is on the edge of the Israeli imposed buffer zone along the Gaza – Israeli border, is a hideout from the sights, sounds and issues that bring memories of his sons back to him. “I left my wife and my daughters to come here and live in peace. My wife is very sick. If she is reminded of the incident she will start to scream like she is not human, she cannot breath, she sometimes losses consciousness. I cannot bear to be around her when she is like that.”

Despite his best efforts to escape, however, Mohammed is reminded by the smallest detail. “This time of year is the hardest. Everything reminds me of that day. The crisp air, the crops that grow, the dark; everything about this time of year takes me back to the incident.” Much like the parents of many others who lost their lives during the Israeli onslaught, Mohammed finds it especially painful to be around those who are around the same age as his sons. “I was at the wedding of my young cousin recently. He is the same age as Ibrahim would have been if he was still alive. I couldn’t stop thinking of all the things that he could have done with his life if it wasn’t taken from him; education, marriage, children, now he can do none of this.”

Muhammad has suffered both mentally and physically as a result of stress and physical injuries incurred due to the shooting. Shuffling slowly and carefully around his farm house home, his physical symptoms are obvious. “I had severe damage to my neural system as a result of the attack,” says Mohammed, “my balance is now destroyed.” Lifting his top to show the long scar running down his back where he had surgery to repair his injuries Muhammad says his ability to fight infection and illness has deteriorated since the attack. The stress he feels as a result of his experience has left him unable to sleep and he is forced to take sleeping pills to steal a brief 4 to 5 hours of sleep every night before waking very early in the morning.

Soon, Mohammed’s remaining sons and daughters will be fully educated and independent. Mohammed says when that time comes his work is done and there is nothing left keeping him from the afterlife. “The moment my children say we need for nothing, that’s it, I have done everything I am responsible for, I can go,” says Mohammed. “The good times have gone, they will not be back. I hope for nothing”. When asked what his greatest fear for the future is, Mohammed replies; “my fear is a future.”

Regarding the pursuit of justice within Israeli courts Mohammed is scornful. “Absolutely not; the soldier who killed my sons did not act in a vacuum. He had permission from his superiors. What is more their crimes are ongoing. Stories like mine are not isolated incidences.” Any redress in Israeli courts, for Mohammed, were it forthcoming, would be irrelevant in any case. “Can I go to a court to restore my sons? No” says Mohammed. “What is the point in bringing the soldiers who killed my sons to justice when there will simply be more and more after them? When others will lose their sons as well? Soldiers commit these crimes because they know they have immunity.”

PCHR submitted a criminal complaint to the Israeli authorities on behalf of the Shurrab family on 19 August 2009. To-date, no response has been received.