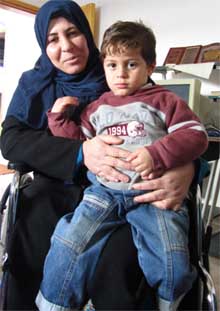 Wafa al-Radea (39) together with her son Iyad (3). (Photo: Palestinian Centre for Human Rights)

On 10 January 2009, at around 16:30, Wafa al-Radea (39) and her sister Ghada (32) were targeted by two Israeli drone missiles while walking on Haboub street, one of the main roads in Beit Lahiya. The sisters were walking during the Israeli announced hour long ceasefire, and were on their way to a clinic nearby because Wafa felt that she was close to delivering a baby. Both women were severely injured in the attack.

“When people came to help I could hear them speak but was unable to respond. They were saying that I was dead,” remembers Wafa. While Ghada was taken to hospital with severe injuries to her legs, people had covered Wafa as they thought she was dead. Eventually an ambulance brought her to a hospital where doctors carried out a caesarean section surgery in an attempt to save her baby. It was only during the surgery the doctors realized Wafa was still alive. While her son, Iyad, was born, doctors amputated Wafa’s right leg and attempted to treat her other injuries. On 12 January both sisters were transferred to a hospital in Egypt for additional medical treatment. Wafa underwent a series of operations until the end of April and then had 3 months of rehabilitation. Wafa and Ghada returned to Gaza on 29 and 27 June 2009.

Wafa vividly remembers the months she spent in Egypt. “My clearest memory of that time is the unbearable pain caused by the changing of the bandages. It took nurses 5 to 6 hours each time. I underwent many surgeries. After an operation to transplant skin from my left thigh to a lower part of my leg, nurses removed the transplanted cells by mistake when cleaning the wound. I had to undergo the same surgery again, this time taking skin from my arms. I was screaming because of the pain. My brother Walid (25) lost consciousness and was bleeding from his nose. He couldn’t bear what was happening to me. I was very angry at everyone after the operation.” Wafa’s brother Walid was with her throughout the whole period in Egypt. She didn’t see my other relatives from Gaza. “It was very difficult for them to visit me because travelling to Egypt is costly and they had to look after the children,” she says.

“When I left my children I was walking and my children had not seen my wounds. The most difficult moment was when I came back with only 1 leg and many injuries. I was a different Wafa. When I came back I was supposed to happy and the people were supposed to be happy for seeing me but everyone was crying,” Wafa recalls. “I noticed that my children watched my every move. Jehad kept following me with his eyes, watching how I went to the living room, how I sat down. He refused to go out and play with other children. He just wanted to stay with me in the home. I was very affected by the situation of my children. They are always ready to help me whenever I try to move or do anything.”

Wafa’s eldest daughters, Lina (19) and Shourouq (16) had taken care of Iyad while their mother was in hospital in Egypt. “One of them would go to school in the morning and leave Iyad with her sister. In the afternoon it was the other way around.” She continues: “when I came home they brought Iyad and put him on my lap. He was blond and beautiful and I thought he was a nephew. I couldn’t imagine that he was my son. I asked them about Iyad and they told me that he was on my lap.” Wafa takes a lot of strength from having her children around her. She says “I am very grateful and happy for having my children. They help me with everything and keep my morale high. Even when I am sad, I would smile if my children came to me. I want them to feel that I am happy because I am with them.”

Wafa finds it difficult to accept help from her children: “I always used to be the one who would help them. Before, I used to go to the school to check on the children and walk to the market to do the shopping. Now if want to go out I must use a car. And if I want to move in the house I must use a wheelchair. I also use the walkers and if Iyad wants to take my hand I cannot give him my hand because I am afraid that I will fall. I need my hands to hold the walkers.”

Wafa received one year of physiotherapy in Gaza for her back, pelvis and her left leg. Despite several attempts, so far she has no prosthetic leg. She also still undergoes treatment for her left leg. “My leg is getting better but I am still in hospital from time to time, for example when I have inflammations. One month ago I was in hospital for 6 days. In winter my wounds hurt more and I feel pain in my pelvis, back, abdomen and legs.”

Despite constantly being confronted with the past Wafa tries to focus on the future. “I hope that our children will not have to pass through similar experiences when they are older. I wish that their lives will be better. But my children keep asking me ‘will there be another war, come again and kill us all?’ They are afraid and I see how the war negatively impacted on them,” she says.

Wafa feels great frustration over how the crime against her and her sister caused so much suffering and yet goes unpunished. “It has been 3 years since they [Israel] attacked us and there is still no response. I spoke to many people from human rights organizations about my story and what is the result of it? There is no result or action whatsoever.”

PCHR submitted a criminal complaint to the Israeli authorities on behalf of Wafa al-Radea on 07 October 2009. To-date, no response has been received.