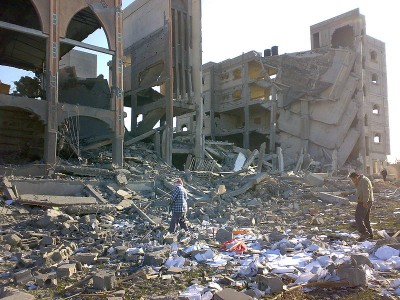 Simply put, I hate war. I love peace, for I don’t live peacefully just like others. My youngest sister hates war too. She could never forget the sounds of American-made F16s raiding Gaza’s only Power Plant, burning it to ashes, which happened to be close to our house. I could not forget her screaming that was lower than the F16s’.

Palestinians believe in peace. We hear about the so called the “peace process” in the news outlets and it’s never proper to discuss PR campaigns when we are talking about PEACE, that endless process. Bibi always preaches us on how to make peace, wherever he goes and whenever he talks. The idea of peace is turning to be ideal, nothing more. We believe in peace and justice. They can’t be separated as our bodies were during The Cast Lead. We don’t believe in their “peace” and abhor their apartheid-like style “shalom.” You see guys, evidentially we reject peace; we are rejectionist.

Therefore, Palestinians deserve to be bombed. The other day, they refused to listen to the wise warnings of Tzipi Livi from Cairo as she repeated it several times: enough is enough! Pardon me; it was Gazans who had the right to repeat the ENOUGH stuff. We have a new Egypt. History does not go back again.

On the very day of war, like many others, I was doing some reading for my final exams as some 60 strikes struck Hamas-run police stations all around Gaza. I was unable to recognize the locations of targets. Electricity went off as bombs were dropping over police stations and governmental buildings. I looked for news in people’s eyes, but could not come out with anything. They were extremely surprised at the big number of dead. Everyone was ready to accept the very notion of losing a friend, a neighbour or a relative. I learned that over 40 people, I know, were amongst the dead. Death was an acceptable thought for its smell was all around.

They were merely numbers and nameless. How much it hurts when people in Palestine are being dealt with as numbers. Mustafa Tamimi was murdered in Al-Nabi Saleh village as he was protesting land confiscation, nevertheless, the media didn’t talk about his sister dying to see him, leave alone how brutally he was murdered, even though this was captured by cameras. Mustafa was only regarded as the first number among those who will be killed in Al-Nabi Saleh.

It kills me when over 1500 people, whose lives were claimed by the Israeli attack in Gaza’s War, are added to the many numbers that we have been given in the modern history. We are not numbers. We are stories. We are feelings. We are Iman Hijjo sitting in her mother’s arms and breastfeeding when the bomb tore her small innocent smile apart. We are Mohammed Al-Durra hiding behind his Dad’s arms bleeding, while his very Dad screams tearfully: The boy died by a bullet. We are the Al-Samouni family that was given a promise to survive if only if they moved inside a tiny room. The next day, the entire family was erased. We are the steps of millions of refugees who were forced to leave their homeland to be displaced till their very last day in life. We are not invented numbers, Sir.

Wrapped in white shrouds, draped with Palestine’s flags, the dead were buried peacefully. A new Era began in Gaza. On Gaza’s War 3rd anniversary, Arabs took to the streets to say Gaza is the cardinal of freedom, to break the walls of silence. Peace, not theirs, be upon Gaza. They are afraid of memories.

Yousef M. Aljamal works with the Center for Political and Development Studies [CPDS] , a Gaza based non-profit organization facilitating Palestinians representing themselves “in the tongues of its own people” to convey their own message to the world and enhance Palestine’s presence in world forums and international organizations.