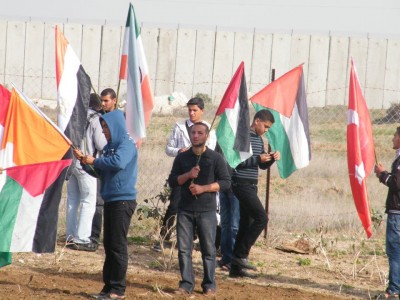 We set off from in front of the Beit Hanoun Agricultural College under the flags of half a dozen countries, but listening to the music of Palestine.  Every Tuesday, for three years, we set off from here into the no go zone, that three hundred meter strip of death which surrounds Gaza.  We are a diverse group, the Beit Hanoun Local Initiative, the International Solidarity Movement, and other Gazans.  We march down the road into the no go zone, the tension builds, we play music, we chant.

Today, as we approached the buffer zone a shot rang out.  Israeli soldiers shooting into the air, shooting from the concrete towers which line the border of the prison that Israel has created in Gaza.  We do not stop, we keep walking into the no go zone.  The no go zone is different this week, it is green.  Usually it is a dead brown, every couple of weeks Israeli bulldozers come and uproot any plants that manage to sprout, nothing is allowed to live in the no go zone.  It is hard to imagine that this used to be an area of thriving orchards, that their used to be houses here, they have all been destroyed, not just destroyed, erased like the hundreds of Palestinian villages which most of the people of Gaza are refugees from were erased after 1948.  Just as Palestinians have refused to be erased by the Nakba, the Naqsa, the Occupation, or the war on Gaza, the no go zone steadfastly refuses to become a place of death, green plants emerge from the land after every rain.

We march all the way to the giant ditch which scars the no go zone.  We plant a Palestinian flag.  It joins the other flags we have left in the no go zone, the orchard of olive trees which we planted here last month.  Sabur Zaaneen from the Local Initiative spoke, he vowed to “continue the popular resistance despite the bullets of the occupation, resistance would continue until the liberation of Palestine.”  Almost on cue he was answered by the bullets of the soldiers, shots began to ring out, not at us; the soldiers were shooting into the air.  We calmly walked back to the road to Beit Hanoun; we still had work to do.

On the road to Beit Hanoun we met a tractor.  We had brought the tractor to farm, to plant the land of the no go zone.  Israel claims that the no go zone extends only three hundred meters, but in reality the danger extends much farther, just before the demonstration today the Israeli’s had shot a fourteen year old boy from Beit Hanoun while he gathered scrap metal to help support his family, he was not in the no go zone, it didn’t matter, they shot him anyway.  We drove the tractor into a large patch of unfarmed land next to the road.  We lowered the disc and began to turn the soil.  The thistles that grew here were turned under the red soil of Gaza.  Young men pulled stones from the field; they were left by the cactuses which mark the border of the land.  As soon as the soil was turned young men spread out and began to plant it, barley.  When the rains come, the barley will sprout, in four months we will harvest it.  We will harvest it under the guns of the Israeli army, just as Palestinians have done for sixty four years, steadfast in their refusal to abandon their land.  We are planting not only barley, but also resistance, steadfastness.