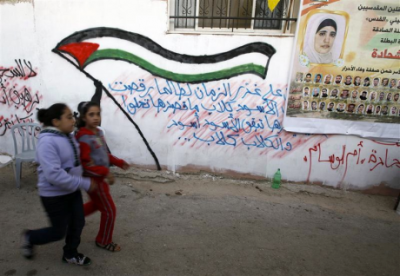 Twenty-eight cases of children being shot at by the border fence between Israel and the Gaza strip whilst gathering building materials like gravel, or working by the fence, have been documented by Defence for Children International in their latest report ‘Children of Gravel’.

The shootings reportedly took place between March 26 2010 and October 3, 2011, according to Defence for Children International (DCI)-Palestine Section . According to DCI, the Israeli soldiers often fire warning shots to scare off workers by the border. Their report also states that ‘these soldiers sometimes shoot and kill the donkeys used by the workers, and also target the workers, usually, but not always, shooting at their legs.’

Forty percent of Gaza’s population is unemployed and 80% of the population is completely reliant on foreign assistance. In addition, Israeli restrictions limit the amount of construction material entering the Gaza borders for reconstruction and development. As a result, many workers collect gravel and sell it to builders to use for concrete. The children among the gravel collectors earn about US$8-$14 per day to help support their families.

The North Gaza governorate is one of the most impoverished governorates in the occupied Palestinian territories (oPt) and the neediest in the Gaza Strip. In comparison to the other governorates in the Gaza Strip, North Gaza’s food insecurity rate is the highest at 60% and the unemployment rate the second highest at 39%. World Vision works with communities in North Gaza to help improve family livelihoods and help ensure their children are cared for and protected.

The blockade of the Gaza Strip, including Israeli restrictions on items entering the borders, continue to harm Gaza’s deteriorating economy. The Israeli military continues to restrict Palestinians’ access to the land on the Gaza side of the Israeli-Gaza border, maintaining that anyone that comes within 300 metres of the borders puts his/her life at risk, which has had a negative impact on the physical security and livelihoods of Palestinians living in that area. DCI’s documentation indicates that children have been shot at while being between 30 to 800 metres within the Israeli border fence.

To read the DCI’s Urgent Appeal-Children of the Gravel, please visit http://www.dci-palestine.org/documents/urgent-appeal-ua-410-children-gravel.

World Vision continues to work for the well-being of children and advocate for an end to the Palestinian-Israeli conflict. World Vision believes that this conflict threatens the lives of all Palestinian and Israeli children, and one of the greatest obstacles to achieving fullness of life for each and every child is the ongoing conflict and the perpetuation of violence.