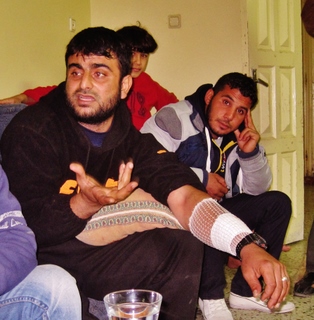 Nahad Rajab Mohamed Al-Hesy in his home (Photo: Radhika Sainath, Notes from Behind the Blockade) – Click here for more images

The Israeli navy violently seized two Palestinian trawlers in Gazan waters yesterday, shooting one fisherman in the arm, and ultimately forcing at least ten men to Ashod, Israel, where they were interrogated for several hours. Israel released all of the fishermen at 2 a.m. this morning.

Twenty-eight year old Nehad Mohamed Rajab Al-Hesy reported that his boat, along with six others, were fishing in the same area  at about 11:30 a.m. Tuesday morning when he suddenly saw five Israeli naval ships—three large and two small—approach his boat, along with that of Omar al Habil.  According to Al-Hesy, both men had sued Israel for destroying their boats in the past.

“The Israelis told four boats to go back to Gaza. All six boats tried to pull up their nets, but they prevented us. The Israelis started to shoot at us a lot and I got shot in the arm.  The bullet entered and went out of my arm,” he added holding out his left arm wrapped in white gauze and bandages.

“It was a terrible thing. It was a scary thing,” said 22-year-old Jarrmal. “Now we are all sick from the cold water they forced us to swim in.”

Once on the ship, Al-Hesy was blindfolded and Israeli forces tied his arms behind his back and forced him to sit in a painful position for several hours. “My back, shoulders and my arm that was shot were hurting a lot,” he said, “but I was thinking about my boat which my family depends on for income.”

“Why did you break the 3 mile limit?” an Israeli soldier asked him.

“During Oslo, we were allowed to reach 20 miles so why do you prevent us from going past 3 miles? These 3 miles not enough,” Al-Hesy responded.

“I’m not the Israeli army,” the soldier responded, according to Al-Hesy.  “But there is something wrong with you. Why don’t you fishermen gather and ask the United Nations and go to the human rights centers so you can go more than 3 miles?”

The soldier subsequently changed the subject of the interrogation, asking Al-Hesy the names of the policemen working at the port.  When the interrogation finished, Al-Hesy was told that he would be sent back to Gaza, but he refused to go without his boat.

He explained how in 2003, the Israeli navy took his boat along with about $10,000 worth of equipment. He told the soldier “All my family depends on this boat. We can’t live without this boat. If I don’t go back I can eat and drink here.  If I go back without my boat I will not eat.”

Al-Hesy and the other men were eventually released at 2 a.m., but his trawler, along with that of Omar al Habil, remains in Israeli custody.  Al-Hesy has been fishing since he was 13 and makes about 20 shekels a day, or $5.70.  He recalls making 1000 shekels ($285) when Israel permitted fishing up to 20 miles. In addition to sustaining a bullet wound to the army, Al-Hesy also had scabs around his right ankle from the ankle cuffs.

His lawsuit stems from an incident in 2007 when the Israeli navy destroyed another boat of his.  That case is still ongoing.

“We fishermen never do anything bad. We don’t send rockets from our boats, we don’t touch any of them, but they kill fishermen, arrest fishermen; they took so many boats.”