Gaza attack: “My uncle died in my arms”

“My uncle was breathing when I found him under the rubble,” said Migdad Elzalaan. “He told me, ‘Look after our family, look after the children. Look after them,’ and then he died, right in my arms.” 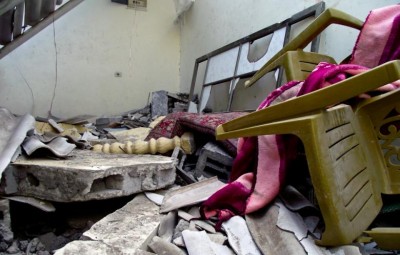 At around 2am on Thursday night, Israeli forces bombed the area beside the Elzalaan household in northern Gaza City, injuring thirteen members of his family and killing his uncle. Migdad’s 12-year-old cousin, Ramadan, died in hospital from his injuries less than a day after the attack.

As 20-year-old Elzalaan stood recalling the night’s attack, he dislodged blocks of rubble poking through large holes in the roof, fearing that they might fall on our heads. He stumbled through the remains of his home while rubble cracked and snapped underfoot, small pieces of house falling occasionally while a drone buzzed heavily, circling above the ruins of the house.

Elzalaan was sitting at the computer before the first bomb hit.

“I brought my younger sisters, Samaa and Samar into the living room, with my grandmother. I tried to shield them and as the first bomb hit, I was injured in my back and leg by pieces of falling rubble. Afterwards, I took my family out of the house to safety.”

After the second bomb struck, Elzalaan headed to his uncle’s house, which shares a wall with his own. “My uncle, his wife and their baby were under the rubble. My aunt told me to leave her, just to take her baby, Ahmed, to safety. I picked him out of the rubble and handed him to someone.”

As soon the 6-month-old was taken to safety, Israeli forces dropped a third bomb. “I shielded my aunt during the third bomb, and then afterwards helped her out of the house.” Elzalaan then returned for his uncle, Bahjat, who was buried underneath the rubble.

The 33-year-old father-of-five told Migdad to look after his family before dying in his nephew’s arms.

“I carried my uncle out of the building and then we brought a jeep to take everyone to hospital, because no ambulances came. By the dawn call to prayer, we were on our way to hospital.”

“During the bombing I was yelling and pulling my hair out,” Elzalaan explained, “Absolutely everyone was injured – thirteen members of my family. My two cousins are still in hospital, they are critically wounded. They are ten and twelve years old.” Hours later, Ramadan, the elder of Elzalaan’s cousins, died of his injuries.

Elzalaan’s neighbor passed through the house, pointed to the rubble and yelled, “This is what Israel does. There were no fighters here, just children and a family. This isn’t a home anymore.”

Migdad Elzalaan’s home was also badly damaged in an Israeli airstrike during the 2008-2009 war and repaired by the United Nations Relief and Works Agency.