Demonstration in the no go zone, Beit Hanoun 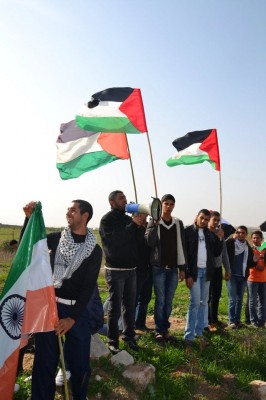 Every Tuesday there is a demonstration against the occupation and the Israeli imposed no go zone that surrounds Gaza, stealing much of Gaza’s best farmland.  Today, it was unseasonably warm, it felt almost like summer.  We started our march from in front of the destroyed buildings Beit Hanoun Agricultural College.  Music played over a megaphone as we marched down the road into the no go zone.  As we got closer to the no go zone the music stopped, it got quiet.  Usually, when the music starts the chanting begins, but not today.  Everyone seemed to be lost in thought, perhaps pondering the green that has recently appeared in the no go zone.  The bulldozers haven’t come for many weeks to kill all life in the no go zones.  Perhaps they were remembering the olive trees, and orange groves that used to be here.  Perhaps they were thinking of the families that used to live in the destroyed houses that we were walking by.  Perhaps they were thinking of the houses that no longer exist, the houses that have been completely erased by the Israeli bulldozers.

We entered the no go zone and went to the flag that we left here several weeks ago.  It flies in the breeze, a reminder that this land is Palestinian, that while the people of Gaza might have been driven from their homes they have not yet been erased by the Israeli military like the orchards that used to grow in the no go zone.  We took the flag down.  We marched further into the no go zone, to land which no one had been to since May of 2000.  We made our way across the no go zone, land scarred dozens of times by the blades of Israeli bulldozers, to a small hill.  We climbed the hill and we planted the flag.  The ground was hard, it has not rained lately, but we found a soft spot and drove the flagpole into the earth.  We piled rocks around its base to strengthen it.  We looked out over 1948, the land which many residents of Beit Hanoun had been driven from 63 years ago.

We began to walk back to Beit Hanoun.  Through the no go zone, on land no one had been to in many years.  As always, when you go new places in Gaza you see new destruction which you had no inkling of before you stumbled upon, but it was always there, another untold story in the crimes of the occupation.  We paused by some rubble that I had seen many times on our marches into the no go zone, I never knew what it had been.  It was a well.  It had of course been destroyed by an Israeli bulldozer, all of the trees which it used to water ground under the treads of the same bulldozer.  The well is dry now.  Perhaps someday it will be repaired and orchards will once again thrive on this land.  Someday, after the occupation finally disappears into the pages of history.  Until then, it stands alongside the hundreds of Palestinian villages destroyed in the Nakba, alongside the thousands of homes destroyed by Israel, as a mute reminder of the crimes of Israel.