One need not be an agronomist to know that its been a long time since the farmers of Khuza’a, Gaza have tended to their land near the border.  When we arrived on Friday, the densely packed soil formed small hills with alien, ridged, patterns: Israeli tanks had roamed here, dozens of them. It was hard to imagine how anything ever grew on this brown, barren soil, much less the hundreds of olive, orange and grapefruit trees the Qudaih family reminisced about. 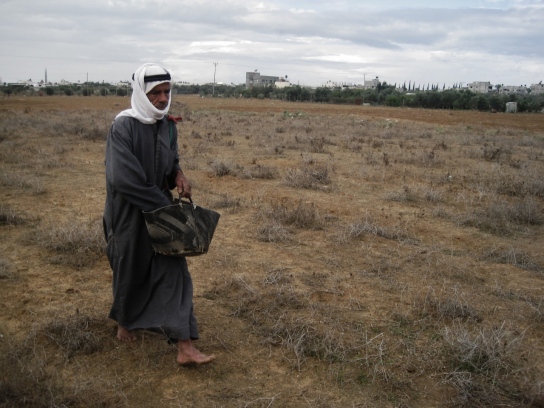 But those groves and the greenhouses too, were long gone: the Israeli army bulldozed them in 2002 to create the ever-expanding no-man’s land Israel calls the “buffer zone” and Gazans call the “kill zone” — any Palestinian who steps foot inside is subject instant death or dismemberment by the Israeli army fire.

Khaled Mahmood Suleiman Qudaih called us a few days before, asking us if we would accompany his family to his father’s fields so that they could sow wheat.  We met them inside a small tent and they explained to us the situation. The Qudiahs and many other farmers were afraid that the Israeli army would shoot them if the attempted to reach their land near the buffer zone.  We informed them that we could not guarantee their safety, that the Israeli army had killed foreign civilians too.

Alas, our presence and our video cameras was all the impetus they needed to risk life and limb.

On Friday, we arrived to the south Gaza village early, drank two cups of sugary tea with sage, jumped on a cart pulled by a white donkey, and were on our way.  We slowly rode down the main street locals waving as we passed by.  Then we head east out to the farmland, passing between giant slabs of concrete placed at the outskirts of the village in an attempt to protect children playing in the streets from Israeli army gunfire.

The donkey cart pulled us down the lone road heading towards the school. I had been down this road before, my second week in Gaza, when I and 3 local children had been shot at by the Israeli army without warning, reason, or explanation. I understood why those farmers feared the Israeli army, and had not tended to this land in four years.

Our donkey continued on, and we passed the bombed-out shell of a house, covered in fuchsia bougainvillea. We had now reached the point where the Israeli army had shot at me three weeks before, where the road curved towards a high school.

It was quiet.  The sky was cloudy, and the Israeli military towers could be seen in the distance. The donkey turned off the road and onto the land, we were now slowly approaching the border, which was about 300 meters away.  Khaled’s father, Mahmoud, took the bag of wheat off the donkey cart, and I along with the other foreign volunteers donned our fluorescent yellow vests.

Mahmoud got right to work, briskly walking back and forth across his land, towards the Israeli military towers and back, sprinkling wheat on the barren surface.  Those who attempted to photograph him would get a fistful of wheat in their face; it had been five years since he had come to this land and nothing would deter him.

I wondered how these seeds would materialize into actual wheat just lying there on the hard ground, and when the Israeli army would start shooting.  Would we get actual warning shots this time?  According to the farmers, the machine guns were operated remotely – there were no actual human beings inside the towers.

Then the tractor arrived, and it all started to come together.  More farmers emerged with donkeys and equipment. They too wanted to visit their land.  One of us sat on the tractor, and others spread out, video cameras out, ready to record should the Israelis shoot at us.

But it was still early, and the people farmed in silence, certain that it was just a matter of time before the Israeli army started shooting.  Indeed, the border seemed very close. Could this nonviolent farming action end well?

I spent my time staring at the towers, thinking up different iterations of how the Israelis would shoot us. Unlike the day before, when I discovered what a crappy cabbage harvester I was while accompanying farmers in north Gaza, there wasn’t any actual work I could help with.

One of the other farmers even brought me a giant metal bullet he found in the earth. It wasn’t like anything I had seen before three to four inches long, and much heavier than a bullet from an M-16 military rifle.  And then he showed me one of the hundreds of white flyers I had seen stuck in the earth containing a little map of the Gaza Strip and lots of writing in Arabic.

Israeli planes had dropped “thousands” of these flyers over Khuza’a,  which state:

Involving yourself in terrorist activities will bring danger to you, your children, your families and your possessions. Distance yourself from this danger .  .  . Consider yourself warned.

The flyers had blown east, inland, towards the border. I wondered if any of them had blown back to Israel.

A couple of hours passed, and the mood grew celebratory. I wanted to caution them. It wasn’t too late, the Israeli army could still shoot us. Surely, if they shot at 2 women and three children farther away from the buffer zone, they would shoot at a large group of  farming closer.

But it was not so.The farmers plowed the field twice, tank tracks erased. Little black beetles scurried out of holes as we walked across the soft, upturned earth back towards the white donkey. It started to drizzle but moods were high.

“For four years I did not reach my father’s land!” said Khaled.

But the victory was bittersweet. “Before, [this area] was full of greenery and trees and now it’s like a desert,” he explained.  “But still I’m very happy to reach my land and plant on it.”