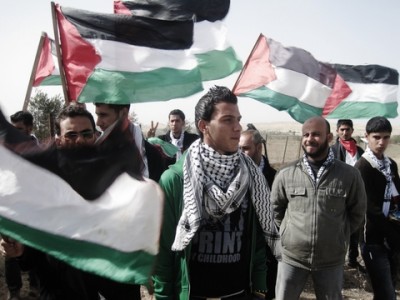 I awoke today with the news that the NYPD was clearing out Occupy Wall Street and that Israeli tanks were shelling “northern Gaza.”  In the West Bank, Palestinian Freedom Riders, inspired by the US freedom riders of the 1960s, were getting ready to board segregated buses to occupied East Jerusalem.

Here in Gaza, we head to Beit Hanoun for their weekly nonviolent protest in the buffer zone.  For three years, Palestinians in the north have been marching into the barren, no-man’s land which encircles the inside of the narrow strip like a slowly-tightening noose.

We arrived around 11 a.m. and gathered in front of a bombed-out house down a dusty road leading to the border. This was my second buffer zone protest. At my first, two weeks ago, the Israeli army had fired a few shots from the military towers at the border.  I wondered what would happen today.  As a foreigner, I was to don a reflective fluorescent yellow vest and walk in front of the Palestinians, which seemed to provide them a degree of solace.  They seem to think that the Israelis were less likely to use lethal violence when Americans, Italians, and Brits walked with them.

I was not so sure.

About two dozen people waving Palestinian flags marched down the dusty path towards the buffer zone.  The landscape reminded me of home, of California, with its thorny tumbleweeds and cactus.  It was hard to believe that only ten years ago fruit orchards and olive trees filled this area. But Israel had bulldozed it all, claiming it needed 300 kilometers of Gaza’s most fertile land, but in reality taking more.

We past a small farm and the family waved at us. They were very brave to have stayed, I thought.  Another farm had stuck a large white flag in the dirt in front of their house, as I had seen other families near the buffer zone do. Other farm houses had clearly been abandoned.

We were getting close to the buffer zone now, and the journalists that had come along moved from the front to the back. They didn’t want to get shot either. I started to imagine what it felt like to get shot.  Excruciatingly painful, I decided.

At that point, I recalled that I had never made a will. If I died intestate, what law would apply? I had just moved from California to New York, but was I officially a resident of New York? And how would Gaza factor into it all?  Was Gaza like the West Bank, where Israel applied a strange patchwork of Ottoman, Jordanian and Israeli military law as it pleased? Not that I really had much to bequeath.

We continued on, and I could see the Palestinian flag we had planted in the earth two weeks before. It was a windy day, and the flag billowed beautifully. The Israeli army had not shot it down.  About 50 meters behind it loomed the wall and the military towers.

“Our flag is still there!” I exclaimed to Nathan, an American volunteer walking next to me.  The Israelis had used the last Palestinian flag as target practice.

“Do you want to sing the star-spangled banner?” he joked.  I smiled, I hadn’t intended to make the reference. Yasser Arafat had symbolically declared Palestinian Independence 23 years ago today, on November 15, 1988.

We stopped, well before the flag, at a large cement block painted red, black and green. Sabur Zaaneen from the Beit Hanoun Local Initiative, the leader of the march, had thought the area to be more dangerous in recent days.

He gave a brief speech on Palestinian independence and the countries that were standing in the way of Palestinian freedom. As he spoke, I stared at the Israeli towers and the wall, the Israeli flags on top and of the land beyond it on the other side. I wondered if at that moment, Palestinians were attempting to board Jewish-only buses in the West Bank, facing violence from Israeli settlers not unlike the KKK in the Jim Crow south.

The speech ended and the Israelis had not shot at us.  A few of the young men broke into a dabke dance, a Palestinian line dance of sorts, as one of them played the tabla and sung, and the women clapped in rhythm. I didn’t know the words but I clapped along as well.

One day, Palestine too would be free.