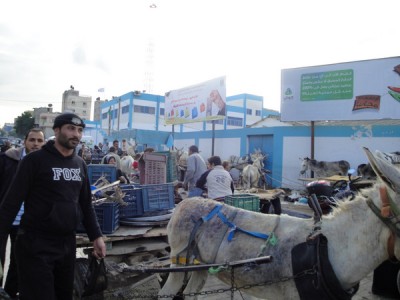 Last week Eid al Adha was celebrated in Gaza and other Muslim communities worldwide. Eid al Adha is one of the most important holidays in Islam, marking the end of the Haj (annual pilgrimage to Mecca) season and symbolizing sacrifices for Allah as well as asking for forgiveness. The official day of Eid al Adha, which fell on Sunday 6 November this year, is celebrated by ritually slaughtering animals, such as cows and sheep, and parents giving their children a new outfit and some pocket money to buy toys. The meat of the slaughtered animals is divided among families and neighbours, and especially shared with those who cannot afford to buy meet.

While spending a wonderful time with friends and their families during Eid, I reflected on the essence of holidays. Regardless of the location, religion or traditions, celebrations of holidays seem to have three core elements in common: spending time with family, giving to others and a feeling of happiness. But what does a holiday look like without those?

Many families in the Gaza Strip had to celebrate another Eid without their brother, son, father, daughter, or sister. Following last month’s prisoner exchange between Israel and Hamas, there are still about 5,500 Palestinians[1] languishing in 22 Israeli prisons and detention facilities.[2] Over 700 of these prisoners are from Gaza and have not seen their relatives for many years as the Israeli occupation authorities have not allowed any family visits. On the second day of Eid several relatives (mostly mothers) of Palestinian prisoners gathered in front of the Red Cross Office in Gaza city. They held a weekly sit-in demonstration in support of their imprisoned family members. They have been coming together in solidarity, holding pictures of the sons, every Monday morning for the past 17 years. The constant sadness over the absence of their relatives seemed even more tangible during this important holiday. A woman sitting next to me showed me a picture of her son, saying she had not seem him for four years and that she always kept hoping that he would come home again the following day. She had been cherishing this hope for the past eleven years. There seems to be no other consolation than to hope that one day she would see him again, so we just repeated together “insh’allah” (God willing).

For Eid al Adha it is tradition to buy  a new outfit for your children and to give them some money for buying toys. However, the suffocating closure of the Gaza Strip has made increasingly difficult for parents to provide for their families, let alone giving their children something extra. The closure has brought the Gaza economy to a standstill and has driven the unemployment rate up to a staggering 42,5%. Approximately 75% of the people in Gaza receive humanitarian aid of some sort. So for many parents in Gaza Eid means more struggling and juggling; more borrowing, and trying to figure out a way to give their kids the traditional Eid gifts. Even more than usual, the high food prices were a ‘hot topic’ for conversation and everyone was eager to find out where to go for the best deal.

Two days before Eid, when I was on my way to visit a friend in the north, I learned about another absurdity of the circumstances in Gaza. Throughout the streets and fields I noticed there was an unusual number sheep, cows and goats. Since there is not a lot to eat here for those animals and many of them were grazing around rubbish dump sites, I started wondering: where had these herds of fluffy Eid meals come from? Turned out that a lot of the animals for Eid are smuggled (yes, smuggled) in through the tunnels with Egypt. Even though I could have expected this, I was still shocked. Even the holiday meals have become a smuggled commodity. Looking at these goats, sheep and cows and visualising their trip through the tunnels, the absurdity of the policies once again hit me.

Besides the absence of loved ones and the financial struggles, there is the ever present risk of army attacks from the border, the sea, and especially air. A week before Eid, 15 year old Rawand Tayseer Abu Mughassib was on her way to her grandmother’s house nearby, for an evening visit. They all live close to the border area in the central Gaza Strip. As Rawand headed for the front gate, separating the house from the road in front of it. Suddenly, an Israeli plane fired a missile which landed four to five meters away from her, on the road. She was lucky to be one step away from the gate, with the wall protecting her from most of the deadly shrapnel. The gate was blown out of the wall and only just missed Rawand.  She was injured in her left hand, and three houses (including that of her family) were damaged. The missile apparently targeted Palestinian fighters in the area. Since the attack, Rawand and her siblings are very anxious, especially after sunset, and are afraid of being alone. Rimas, Rawand’s little sister wakes up crying from nightmares every night and has started bedwetting. The father, Tayseer, says he does not know how he can comfort his children when they are so full of fear: “there is nothing I could do or say, instead of just being there with them”. He says he is also struggling with his own fears, but that he insists to no show this to his children. Rawand and her family started their Eid with fear, feeling abandoned and unprotected.[3]

In a place like Gaza holidays seem as much a test of the people’s resilience and strength as a time of joy and celebration.

[1] Among those thousands are 251 children, 37 women, and at least 124 prisoners who are detained for long periods without charges.

[2] Most of these prisons and detention facilities are located within Israel. The imprisonment of Palestinians from the occupied territories (Gaza Strip, West Bank) in Israel is illegal under international law and violates the Fourth Geneva Convention, particularly Article 76, which stipulates that “Protected persons accused of offences shall be detained in the occupied country, and if convicted they shall serve their sentences therein.”

[3] The Israeli occupation army often uses heavy airstrikes to target fighters in the densely populated Gaza Strip, often risking to cause civilian casualties, who will then be called ‘collateral damage’. Since January this year 18 civilians were killed and 16 injured in airstrikes which targeted fighters in the Gaza Strip. Of those who were killed, 3 were children.