#TweepStrike: A call from Gaza to support Palestinian prisoners

In solidarity with Palestinian prisoners held under harsh conditions in Israel’s jails, a new twitter trend emerged today from Gaza. The trend is #TweepStrike and is an open invitation to everyone across the globe to go on a hunger strike on Wednesday Oct. 12th.

A few months ago, I was on visit to one of the prisoners’ families. With moist eyes and a shaky voice the prisoner’s mother told me that she had, for many times, tried to visit her son but “Mr. Kalb,” Mr. dog, had always been there to turn her back home.

My instinct told me then that Mr. Kalb must be a nickname of a cruel Israeli officer. I was wrong. 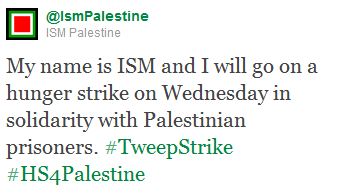 “Mr. Kalb is a huge police dog and he is responsible for the prison’s visits.” She had told me. “According to his mood, we’re either allowed to see our loved ones or ordered to escort ourselves back home. If Mr. Kalb is in a bad mood and barks a lot, we have to understand that visits are not allowed, if he is friendly, officers will let us in” her explanation followed.

To be humiliated to such extent, to be jailed without reason (as most cases have proved to be), and to prevent ICRC experts from testing jails’ conditions are nothing but illegal acts of a racist state that enjoys severe impunity and support of world powers, ahead  of them of course,  the United States.

To spread the word out we are using the following form to state our intention to join the strike:

My name is ( ___________ ) and I will go on a hunger strike on Wednesday in solidarity with Palestinian prisoners.  #TweepStrike #HS4Palestine .