The ongoing trial in the murder of solidarity activist Vittorio Arrigoni

by Hussein Amoody and Radhika S. 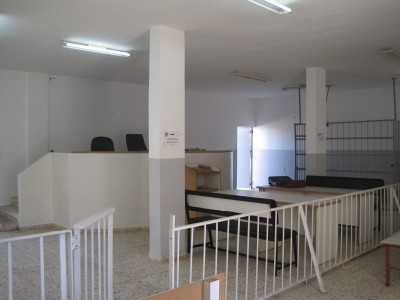 The small courtroom was packed with friends and colleagues of Arrigoni, in addition to four or five members of the defendants’ families. All four defendants appeared unshackled behind a caged-off portion of the courtroom and remained standing throughout the trial.

The trial began today with the parties checking where they had left off on the September 22 session.

The prosecutor, dressed in olive-colored military pants and a khaki shirt, then stated that “each of the accused strangled him [Arrigoni] by plastic handcuffs,” and therefore all four were complicit in Arrigoni’s kidnapping and killing. Previously, only two of the defendants had been charged with murder; the other two were charged with aiding and abetting in Mr. Arrigoni’s kidnapping and killing, and the fourth in providing the house where his body was found hanging.

The attorney for Defendant Mohammed Salfiti then requested that the official responsible for making a video and report of the defendants’ confessions on behalf of the government appear in court so that he could be examined by the defense.  The three judges, garbed in military uniform, denied the request after the prosecutor stated that “in the military we are all one unit,” and that the individual who made the report had already confirmed its accuracy.

The prosecutor then submitted into evidence a mobile phone and a laptop computer, which he stated were used in the commission of Arrigoni’s murder.

Judge Mansour held up the mobile phone and asked Salfiti if the phone was his. Salfiti stated that “I came after they kidnapped him [Arrigoni] and I recorded that video by my mobile.”

Defendant Tamar Hasasnah was then called forth from the metal cage and questioned by Judge Mansour about a how a laptop admitted into evidence was used in the commission of the crime.  Hasasnah stated that the laptop was used to edit the video of Arrigoni and publish it on the internet.

After Hasanah’s testimony, the prosecutor added that Defendants “used the laptop to edit the video and publish it on the internet asking to release Hisham al-Saidany,” then described Arrigoni’s physical condition as depicted in the video.  The government arrested al-Saidany, the leader of Tawhid al-Jihad – which denied any role in the murder – in March of this year.

Salfiti then testified that the laptop was his, and that it was used to publish the video of Arrigoni on the internet.

Approximately twenty minutes into the session, an argument broke out between counsel when the defense interrupted the prosecution and stated that they had not received copies of certain files with respect to the laptop, which the prosecution claimed had already been made available.  The defense attorney then told the judge, “he is trying to call us liars.”

The prosecutor than asked the judge if the rest of the trial could be delayed so that he could “get other files” needed for the trial. The exact files were not specified. The Court agreed to adjourn the trial until Thursday, November 3, 2011.

An attorney with the Palestinian Committee for Human Rights (PCHR) and five volunteers with the International Solidarity Movement (ISM), including one attorney, observed the trial.  Arrigoni, a longtime member of the ISM, was kidnapped on April 14, 2011.  Thousands of people throughout Palestine mourned his death.