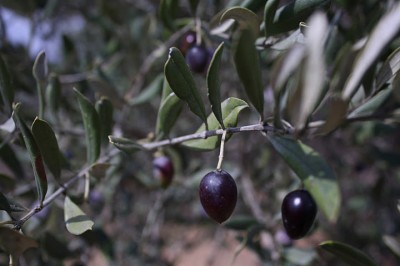 As Palestinians in Salim began the first day of their annual olive harvest this morning, October 2nd, Israeli Occupation Forces locked the gate which gives those living in Salim access to their olive trees. The gate was unlocked at 7:00am to allow farmers to reach their trees, but shortly afterward, soldiers locked the gate for purported ‘security reasons’ around 9:00am according to many reports. When passing shortly after 8:00am, four ISM volunteers reported no problems with two soldiers guarding the gate. Sporadically throughout the day, the gate was opened a few times to allow access to the olive trees or village center. From 9:00am until 5:00pm, there was only a possibility for those living in Salim to reach their land through the single entrance/exit.

The village itself is divided — the settler only road has carved the land in two and beyond the road lies the majority of the olive trees which are adjacent to the illegal Israeli settlement, Elon Moreh. After the al-Aqsa Intifada, the gate was built not only to restrict movement for Palestinians in Salim to reach their land where the majority of trees are growing, but also to continually keep the residents of Salim completely enclosed. The gate now serves as the only entrance and exit for those living in Salim to reach their olive trees, many of which have been overgrazed by settler’s sheep.

Seven years ago, 100 sheep were stolen by settlers from Salim’s Abu Sultan while he and his family were bound up inside their home. Those sheep, now belonging to the Eskali family, graze on the lower branches of the trees belonging to the Ahmed Abul-Jabar’s family which then leave them barren, dried out, and unable to grow olives. It isn’t just overgrazing, however — the farmers from Salim are only able to tend to their trees twice a year due to the Israeli occupation and annexation of their historic land. In April, Palestinians are allowed to till the land and ensure the trees are ready to grow. The next time they are able to reach the groves is October when harvest season begins. Palestinians are restricted from being able to access their land in order to properly irrigate, prune, and care for the olive trees. Today, family members all remarked how poor this season was in particular due to these problems from the illegal Israeli occupation.

This morning marked the first of four allotted days Palestinians in Salim for the olive harvest. Before the Intifada, Salim’s farmers could spend a month properly picking the olives. Now, after applying for a permit through the Palestinian Authority’s Ministry of Agriculture which secondly gets approved through the Israeli District Coordination Office, residents of Salim are only given four days.

Many farmers today reported being frightened and scared of being threatened by the settlers surrounding Salim or being intimidated by the Israeli soldiers. While there were no clashes with settlers today as in the past, the closure of the main gate proved troublesome for many looking to access their land. Soldiers reluctantly unlocked the gate when Palestinians and ISM volunteers asked only to lock it again shortly after.