Second settler arson attack on Madama in a week

On Thursday June 2 at about 1pm, the villagers of Madama were again victims of a settler arson attack on their land.

According to Samed Hamad, a 15 year old Palestinian who saw the incident, settlers from the nearby illegal settlement Yizhar, set fire to a crop Field on the mountain not far from the place they had attacked on Monday 30 May. Residents of the village went up to the blaze to put it out and it was then that a group of settlers accompanied by settler guards and Israeli soldiers attacked the Palestinians with stones. According to Samed, one of the soldiers later handed over his tear gas gun to a settler to fire at the villagers. The army entered the village from the “bridge” (a main road into the village) and from the settlement, thereby cornering the residents of Madama and trapping them.

Whilst the ISM was in Madama to report about the attack this afternoon, three Israeli jeeps entered the village again, throwing sound bombs and arresting 17 year old Hussein Othman Muhammad, seemingly at random. They tied his hands behind his back with a plastic strap and frog marched him blindfolded to the army jeeps where he was then forced to kneel down and eventually bundled into the back of one. When ISM talked to residents of the village later, they said that Hussein had been up on the mountain helping to put the fire out. 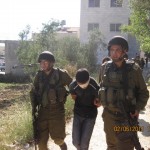 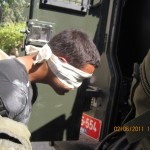 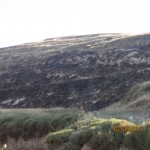 Today marks an increase in the settler campaign against Madama´s residents following an arson attack to wheat crops two days ago and a severe physical attack last week against 66 year old Hamad Jaber Qut which hospitalized him for 5 days.

Madama is a village with 2,000 inhabitants located in the south of Nablus, in the West Bank. According to its mayor, Ihab Tahsin Qut, since the construction of the illegal settlement of Yitzhar in 1985, many villagers have been attacked by the settlers and 1,000 dunams of land have already been confiscated from the village. Settler attacks on the farmers have severely effected the village’s agricultural trade in the past years.