New
Home / Journals / Do you see that land? That land is mine and I cannot go there

Do you see that land? That land is mine and I cannot go there

On May 8, 9, and 10th the farmers of Khuza’a harvested their wheat. Khuza’a is a village near the Israeli border in the southern Gaza Strip. For three days they visited the fields, starting very early in the morning and picking the fruits of their land. For three days the Israeli occupation forces fired from their automated turret while the farmers continued to harvest their grain. However, they did not allow the Israeli Occupation Force to prevent them from going to their land.

The area where the farmers, along with three international ISM activists and five Palestinian activists traveled to, is about 450 meters from the border. Before the second intifada melons were grown there, along with other fruit trees and olive trees. “We came here to do barbecue, party and relax… the Israeli jeeps used to pass in the distance but did not bother us, they used to leave us in peace.” Ahmed said. Today the trees have been uprooted, the plants destroyed. The only thing that can be grown, because it does not require constant attention, is wheat. But the wheat needs several hours to be collected, and snipers have fun terrorizing the farmers during those hours.

On May 8th in addition to the activists there were eight farmers in the fields, mostly women, but also a child of 13 years and a girl of seven, all brothers and sisters of the AnNajjar family which resides in Khuza’a. They were on 10 dunams of their land, collecting the golden-yellow wheat in bundles and they thought that the presence of activists (foreign and not) could protect them at work, and decided to go farther than usual to collect plants to feed their animals. Where the wheat fields end the land is crossed by sand dunes caused by Israeli bulldozers; here grows thorn bushes and small trees that seem dry, but are a good food for donkeys and sheep. A man bends down to pull up some plants, extends his arm and points his finger at a dune a few tens of meters away, “You see that land? That land is mine and I can not go there.”

From the towers, the Israeli forces are not slow to remember who has the power to decide which land can or can not be farmed by these farmers. We heard the first shots in the air above us just before 9:00. Suddenly and without warning, three bullets landed within 50 meters of the farmers who were working their land. When someone shoots into the air you just hear the shot, but if the bullet is in your direction you can hear the whistle, and the sound of the bullet landing. The soil was sandy, and when the bullets hit, we could see three clouds of dust rise. Close. Too close to a group of nearly 20 civilians who were only harvesting wheat. Some twenty minutes later a man, furious, stopped collecting grass for his animals and said of the other side of the border, where a tractor is plowing a field, “Look, the Israelis can grow undisturbed. However if we go out they shoot at us. ” 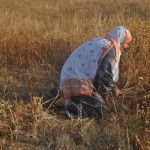 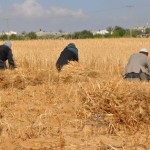 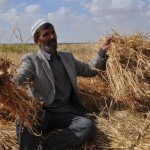 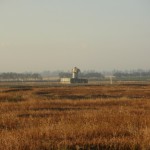 The lands of Khuza’a in Gaza.

On the second day another group, also linked to the extended family AnNajjar, started to collect the grain in a nearby field, which also covers an area of 10 dunam. There were more than 10 farmers intent on collecting the grain and some woman who were collecting grass. But what can they make from 10 dunams of land? Akhmad AnNajjar tries to quantify it: “In the past, we brought home 50-60 bags of wheat, now we are only able to make between 10 and 20: we are unable to take care of the land because we cannot reach it, the amount of grain is much smaller than it was 10 years ago.” From the control tower a shot was heard at around 7:30 and at around 8 o’clock, the motion of the jeeps and tanks across the border were beginning to become constant. On the third day jeeps and tanks continued to move constantly, raising clouds of dust on the land that today is recognized as Israeli. The bullets were not missing either. A man told us: All day they shoot. But when there is presence of internationals they shoot a bit less. ”

Khuza’a is a farming village that is located in the southern Gaza Strip, in the governate of Khan Younis. The center of Khuza’a is located about one kilometer from the border, while about 80% of its arable land (from a total of 2000 dunam) is located in an area where there is a high risk of being hit by Israeli bullets or areas where the Zionist entity has unilaterally denied access, the so-called “buffer zone“. Many dunams cannot be cultivated, and access to some land is completely blocked by the occupation forces. According to a UN report, 35% of all of Gaza’s arable land is in “high risk” areas, and cases of farmers being seriously injured or killed while on their way to cultivate their land are not rare. The poverty line reaches 80 percent, the same for unemployment and the majority of workers who lost their jobs since the beginning of the 2nd Intifada are still jobless. Among the marginalized people are farmers and fishermen who depend on international assistance.

Akmad explains why despite everything, he and his family go there again and again to collect the grain: “We want to eat, and live a normal life. This is our right, this is our land, we will not abandon our fields, even if Israel continues to shoot and try to intimidate us.”