During Sunday 22nd May several streets were closed in the H1 area of Hebron for illegal settlers to walk through the city followed by approximately 50 soldiers. Meanwhile the shops in the Palestinian area were closed and Palestinians were prohibited from walking through the streets and entering through checkpoint 56. 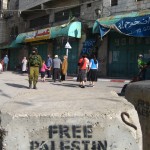 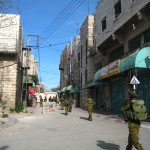 On Saturdays, illegal settlers are normally allowed to take a tour in the old city of Hebron followed and guarded by the Israeli military. A few hours after the settler tour on Saturday May 21st the main street of the old city was attacked by the Israeli military with two sound bombs. One man was injured in his head after being hit by the sound bomb. He and a woman, who became temporally deaf, needed hospital care for their injuries.