This past week in the outskirts of Hebron, ISM activists have been helping farmer Abd al Kareim Al Jabari to work his land after him and his family have suffered continuous harrasment from settlers who have prevented them from working their land. In the most recent settler attack on Monday 8th, settlers stole the crops that Abd al Kareim had gathered during the day, took them to another field and tried to set them on fire. To prevent further attacks, he has asked ISM activists to be present whilst he works on his fields.

Six members of Abd al Kareim’s family have been injured after unprovoked attacks by settlers. In 2005 Abd al Kareim’s arm was broken during a prolonged attack. In 2008 his daughter Ayatt Jabari was hurt after being hit in the head by a stone thrown by a settler. Since Palestinian vehicle movement is restricted in the area, Ayatt Jabari had to wait two hours before the ambulance arrived.

Eight years ago a tent serving as a synagogue was raised on the family’s land. The High court has ruled that it should be removed from the private land, but it still remains, despite several complaints and protests from the family and Palestinian, Israeli and international activists. 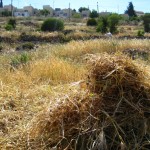 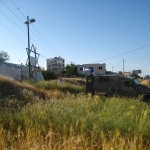 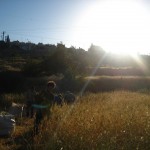 ISM activist helping the farmer to work the land