On Friday, May 6, the Israeli military declared the area of Amniyr, a Palestinian village south of Yatta, a closed military zone and chased away the families who own the land, after demolishing structures and trees on the land the day before. The demolitions at 5 a.m. on Thursday, May 5, when the military destroyed six shacks and uprooted 150 olive trees in Amniyr.

On Friday, the Palestinians of Amniyr had returned to the land and hung six tarps to create makeshift tents. The Israeli army issued a “closed military zone” order on the area at 9:00 a.m. At 2:00 p.m. seven military jeeps arrived, including police and border police. The commanders showed the order and gave the people one minute to leave.

Using sound bombs and tear gas, the soldiers and police forced off the land all the Palestinians present—about thirty adults, many of them elderly, and ten children—as well as accompanying internationals. One woman, Fatmi Mahmoud Jaboor, passed out due to the bombs and required medical attention. The Palestinian Red Cross evacuated her to the hospital, and she was dismissed in the evening. 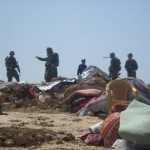 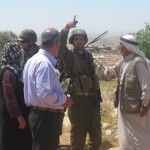 At 7 p.m. four military jeeps returned to Amniyr and destroyed the tarps and what had been left standing in the area.

This is the third time in ten weeks that the military has destroyed trees, tents, dwellings and other structures on the land of Amniyr, effectively demolishing the entire village and affecting six families. Although Amniyr is Palestinian-owned private property, Israel has declared it “state land” and prohibits the people of Amniyr from building any structures or using the land. A local Palestinian leader has told CPT that he believes Israel is trying to confiscate the land of Amniyr because of its proximity to the Israeli settlement of Susiya.

Operation Dove and Christian Peacemaker Teams have maintained an international presence in At-Tuwani and South Hebron Hills since 2004. Follow breaking news from the South Hebron hills on Twitter at cptpalestine.