Today the farmers of Beit Hanoun harvested their wheat

Today the farmers of Beit Hanoun harvested their wheat. This would be unexceptional news in any other part of the world, but in Palestine things aren’t always so simple. Beit Hanoun is close to the Israeli border, a border where Israel imposes an illegal “buffer zone” in which it claims the right to shoot anyone it wishes. Israel claims the buffer zone is 300 meters wide, but farmers and scrap collectors who work along the border are often shot at at distances up to 1.5 kilometers from the border. The border is lined with massive towers containing guns, sometimes the guns fire, and people die. You won’t read about the dead in the New York Times though, they are Palestinian and their deaths are unremarkable and un-newsworthy.

In honor of the slain Italian activist Vittorio Arrigoni the Local Initiative, the group that organized today’s harvest, had decided to launch the Vittorrio Arrigoni Campaign to Harvest Wheat. Today was its first action. Vittorio had often worked with farmers to plant and harvest their crops along the buffer zone, after his death we continue to harvest in his name, in his memory.

We set out to the fields at about eleven. Loudspeaker, posters, and scythes ready. We parked the van and started to walk to the fields, playing Vittorio’s favorite song, Onadeekum, over the loudspeaker. We reached the field and set to work; kneel, cut, and make a pile of freshly shorn wheat. The field we were working in is about a kilometer from the border, it doesn’t look like much is planted closer to the border than this. It is dangerous to work close to the border. After a few minutes shots ring out. They aren’t aimed at us though, at some other unseen farmer, maybe a poor man trying to collect rocks to make cement which is in critical shortage in Gaza due to the blockade Israel imposes. Back to work we go, the wheat still needs harvesting, and there is nothing to be done about unseen shooting. Perhaps later we will read about the death of somebody in the newspaper, but you can be sure that the New York Times will make no mention of the murder. We didn’t finish harvesting the wheat today, but we will back, we will continue to challenge the illegal buffer zone that Israel imposes on Gaza. 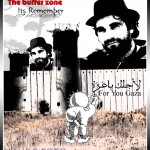 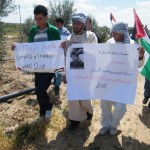 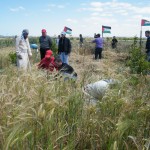