Today, approximately 1,000 protesters in Hebron marked Palestinian Prisoners day with a demonstration calling for Israel to release Palestinian prisoners. At the same time thousands of prisoners joined in a one-day hunger strike to protest their treatment and their legal rights as prisoners.

Protesters in Hebron began by gathering at the Eben Roshd school in Hebron City. Amongst the participants were families of prisoners, members of the Palestinian Authority and international activists. After speeches by family members and local authorities, the demonstration continued with a peaceful march from the school to the Manara square. Protesters carried pictures of imprisoned family members and banners calling for Israel to release prisoners and uphold international laws.

Prisoners Day commemorates the release of Palestinian prisoner Mahmoud Hijazi in the first prisoner exchange between Palestine and Israeli in 1974. According to a report released today by former Palestinian detainee Abdul Nasser Farwana, just about every Palestinian household has had members jailed. According to the report Israel has arrested around 750,000 Palestinians since the six day war in 1967, including nearly 12,000 women and tens of thousands of children

Today over 6,800 Palestinians, from the West Bank, Gaza, East Jerusalem, and 1948 Palestine, are currently imprisoned by the Israeli state according to ADDAMEER. Of those, over 300 are children, 34 are women, 18 are elected Palestinian representatives and almost 300 are ‘administrative detainees’ – that means that they have been detained without trial not having been charged with any crime or seeing the evidence against them. 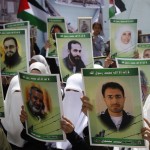 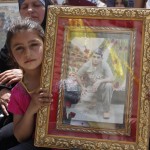 A Palestinian girl shows a photo of a relative held in Israeli jails.