New
Home / In the Media / More demolitions in the Jordan Valley

More demolitions in the Jordan Valley

On April 7th at 6 am the village of Al Aqaba woke up to find the Israeli Army destroying thier road and two homes. Two Caterpillar bulldozers were with the military jeeps. They demolished two concrete houses leaving two families homeless, one with 11 children, and the other with 7 children. Their animal shelters had also been destroyed.

They also destroyed about 2.5km of tarmac road that wound around the hills of the village, and the electricity columns which serve energy to the inhabitants. One of the roads is ironically named Peace Street and is a vital link with the Jordan Valley.The bulldozers also created mounds with the rubble along the road to make it impossible for any vehicle to drive along it.

95% of Al Aqaba, which is in area C, received demolition orders from the Occupation Authority in 2006. Since then they have been mounting a legal challenge, but it is apparent that the occupation army does not wish to wait for their own Israeli `law`.

700 people were forced out of their land in 2006, but the entire village was granted a freeze on their demolition orders until the end of 2011 to give the opportunity to resolve the situation peacefully. Background information about the village is available on their own website.

In the afternoon of 7th April the army also demolished three large animal shelters and a kitchen in the farming community of Al Samra in the northern Jordan Valley. Jordan Valley Solidarity arrived just after the demolitions to find the families devastated, and the grandparents visibly upset.They received demolition orders for the third time on Tuesday 29th March, and were given just three days to destroy their own buildings, making it virtually impossible for them to make an appeal through the courts. When the army did not demolish their buildings straight away they became hopeful that they would be able to get a freeze on the demolition order, but their hopes were destroyed today.

The grandmother was crying at the sight of the destruction, and that the sheep and goats were now out in the afternoon sun without any shade. The animals were all crowding under the tractors and water tanks to try to find their own shade. As well as the animal shelters, the army also destroyed the small kitchen of a family with a young baby, aged just 20 days old. 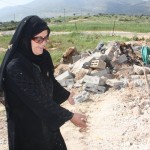 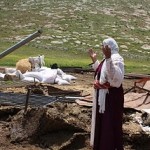 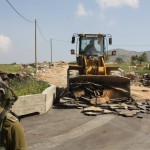 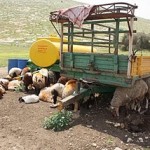 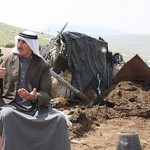