Residents in the village of Khirbet Tana will sleep in caves tonight following the demolition of their homes on Wednesday. Israeli bulldozers destroyed six homes and several makeshift shelters for sheep, which villagers had erected after demolitions in January. The army has demolished multiple structures here on four occasions in recent years, including the village school.

Farmers in the community, on the edge of the Jordan Valley, said that when Israeli soldiers arrived at 9.30 in the morning, they did not give the farmers time to remove their sheep from makeshift tents they had used as animal shelters since the previous demolitions, in January. Observers from EAPPI witnessed dead lambs among the rubble. 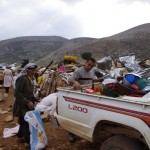 Residents of the village prepare to move into nearby caves, after their homes were demolished by the Israeli army. (Photo: EAPPI / P Hanseid) 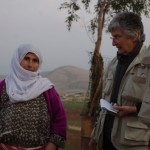 Usra Ahmed Hanani told EAPPI: “We spend all our time with the sheep – how can we live without them? It is not possible.” (Photo: EAPPI / P Hanseid) 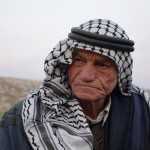 A resident of Khirbet Tana after the demolitions. (Photo: EAPPI / P Hanseid) 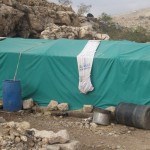 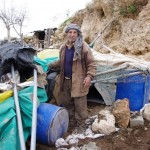 … AND AFTER. Rafi Mahmoud Hanani with the wreckage of his animal shelter. (Photo: EAPPI / P Hanseid) 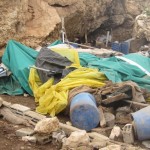 The sheep shelter in ruins. (Photo: EAPPI / A Farr)

The army arrived with bulldozers at around 9.30 on Wednesday morning and razed 17 structures, many of which were provided to the community in the form of emergency assistance as a result of previous demolitions.

Over 50 people lost their homes and personal belongings.

“The deliberate demolitions of Palestinian homes and other structures need for their survival must be brought to an end,” said the United Nations Office for the Coordination of Humanitarian Affairs (UNOCHA) in a statement. Khirbet Tana is in Area C, the 60 percent or so of the West Bank the Oslo Accords placed under full Israeli control. The Israeli authorities enforce strict policies against unauthorized Palestinian construction in the area, but almost never give permits for Palestinians to build there “legally”.

This is the fourth major demolition suffered by the community in the span of a few years. Last year, the community suffered extensive demolitions in January and again in December. On both occasions, a number of homes, animal shelters and the village school were destroyed.

EAPPI observers who also visited the village back in December said Rafi Mahmoud Hanani was distraught.

“After the December demolition he showed us what had happened: his stone house was totally destroyed and his belongings buried under the rubble. Despite all this, he laughed with us and told us about his life in the Jordanian army. This time he was broken. Nothing was left of any of his home or sheep shelters that had been supplied by the Red Cross. He was alone and devastated. His concern was for his three sheep and their new lambs, and his sick wife in Beit Furik.”

“I am 66 years old and I was born up there where you see the olive trees,” said Usra Ahmed Hanani, pointing to the nearby hillside. “(My husband) is nearly 80 years old and he was born here. We spend all our time with the sheep – how can we live without them? It is not possible.”