A demonstration commemorating the beginning of “Operation Cast Lead” was held Tuesday in the Gazan city of Beit Hanoun. Families of victims were in attendance, as were 5 International Solidarity Movement activists. Two years have passed since the Israeli attacks on Gaza, which killed over 1400 people in just 23 days. The vast majority of victims were civilians, including 350 children, according to the United Nations and other major human rights organizations.

The Local Initiative demonstration began at the railway street in Beit Hanoun, near some of the most horrendous attacks which occurred during the land, air and sea bombardment of Gaza. The group of around 40 continued into the ‘buffer zone’ to within 100m of the Israeli border, holding flags and photos of children killed two years ago. During the 23-day attack, none of Gaza’s 1.5 million inhabitants (including 800,000 children) were safe.

Beit Hanoun was not spared this horror, and stories from the attacks continue to haunt survivors. Abed Hamdan carried a banner with pictures of his youngest brother and two youngest sisters, Ismail (9), Haia (12) and Lama (4). While marching towards the border, demonstrators stopped at an intersection with al-Seka Street. At approximately 7:45am on 30 December 2008, Haia, Ismail and Lama were taking rubbish to this intersection when they were hit by two missiles launched from an F16 fighter jet. According to the children’s uncle, their bodies were found in three different locations, each about 50 meters away from where the missiles hit. Relatives ran with Lama and Haias’ bodies to Beit Hanoun Hospital, but the girls had died at the scene. Ismail sustained shrapnel wounds to his abdomen and chest, and had several broken bones. He died the following day in Al Shifa Hospital, in Gaza City. According to witnesses, the Hamdan children had been directly targeted by the Israeli, US-made F16 jet. 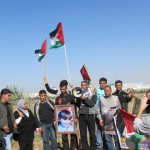 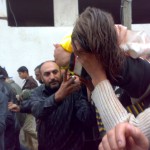 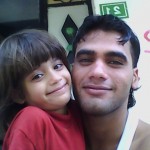 The demonstration passed a collapsed building, where a father described being the lone survivor from his family after the building was bombed. The group then proceeded into the ‘buffer zone’, the strip of land along the Israeli border where attacks continue, injuring and killing countless farmers and rubble-collectors and depriving many of their livelihoods.[1] Demonstrators gathered in the ‘zone’ for speeches, under surveillance from the Erez Crossing watchtowers where Israeli snipers frequently shoot at demonstrators.

Local Initiative co-ordinator Saber Al Zaaneen spoke about the devastation still felt two years after the Israeli military’s attacks. “We’re here to reject the Israeli-imposed ‘buffer-zone’ that takes away so much of our farmland, and in defiance of the 23-day Zionist aggression 2 years ago, horrors once again visited upon us the Palestinians of Gaza, told to the world by the United Nations Goldstone Report.[2] The burning and bleeding under the rubble of the killing from the air, land and sea will never beat us. Long live Palestine, our steadfastness is strengthened by the memory or our loved ones, the hundreds of children murdered while the world watched on their television screens. We emphasize our legitimate right to resist occupation, and use all methods of struggle and fight until the end of Israel’s inhuman siege and bring our eventual liberation.”

International Solidarity Movement activist Adie Mormech expressed the urgency required for the international community and solidarity movements to act.
“The world is now aware of these well-documented crimes against humanity, the massacres, occupation, ethnic cleansing and siege of the Palestinian territories – all collective punishment[3] and serious violations of the 4th Geneva Convention. We cannot stand for this. We cannot allow Lama, Ismail and Haia to die with no justice to them or their family, or the families of the 1400 others massacred in the Israeli attacks. So where is the action? Where is the compensation? Where are the peacekeepers? Where are the sanctions on Israel? How many will they kill the next time, perhaps soon, if nothing is done about the 4 year medieval siege of Gaza or the murder of hundreds of Palestinian children? It is up to international civil society to do all they can and to boycott, divest and sanction from the Israeli Apartheid regime.”

The demonstrators returned to Beit Hanoun, with talk of more violence ahead and the prospects of another impending Israeli assault on the Gaza. Israel’s blockade of Gaza continues unabated, despite being denounced by the European Union, The Red Cross and all major human rights groups as collective punishment, illegal according to article 33 of the 4th Geneva Convention.

On 2nd December 2010, 22 international organizations including Amnesty International, Oxfam, Save the Children, Christian Aid, and Medical Aid for Palestinians produced the report Dashed Hopes, Continuation of the Gaza Blockade[4] stating that there had been no material change to the devastating effects of the siege, and calling for international pressure on Israel to unconditionally lift the blockade.

The Hamdan family remains in ruins from the loss of their 3 youngest children. When their father, Talal Hamdan, spoke of their deaths in his home, there was still a quiet disbelief in his voice at what had happened to them. The family’s sorrow is unending.

“We’re just a simple Palestinian family”, Talal said, sitting in the garden of his home which is two kilometers from the ‘buffer zone’. Before the war, he and his wife spent their evenings watching the children playing in the garden, in the spot where he sat. “There is no life anymore. The children are now usually nervous, argue a lot, my eldest son has given up work and my other son Abed has stopped bodybuilding for which he used to train for competitions.” The family finds it impossible to deal with the terrible loss. “Haja was such a smart girl,” her father remembers. “She was the first in her class, danced dabka, and was able to read the whole Qur’an.” For his remaining four daughters and two sons, a small sum of money initially came from the Palestinian government. One of his daughters received psychological help from Doctors without Borders. The help only lasted two months however, and only reached on of an entire community stricken with grief.

Talal and his wife continue to sit in front of their house in the evening, watching their garden. However their world is now very different, like many others in Palestine. When asked if he had a message for the world, Talal shook his head. “I just want people to know that they were innocent children being killed, who never did anything wrong in their lives”.