3 Arrested Protesting Expansion of Settlement in Jiftlik, the Jordan Valley

Sunday, settlers clashed with Bedouin villagers of Jiftlik in the Jordan Valley, as settlers tried to expand their settlement of Massu´a.

Their expansion will isolate Jiftlik and result in the whole Bedouin community losing access to their pastures, making it impossible for the Bedouins to live in their village and thereby forcing them to move.

In the past week settlers have been setting up a fence to cut away more land from a family in the village, acting with violence at any encounter with that family. Locals asked for the presence of internationals to document the violations going on, and prevent the settlers from completing the fence.

A group of 12 internationals spent the night in the village to be present in the morning when the settlers were expected to continue the fence.

At ten o´clock, thirteen settlers arrived with heavy machinery and tools for erecting the fence. A struggle between the settlers, villagers, and internationals occurred, focused around the heavy tool for pounding fence poles into the ground. Internationals and Palestinian women tried to pull the tool away, while the settlers pulled back and acted violently by pushing and shoving the Palestinian women, and grabbing the internationals. An international girl was thrown to the ground several times, and another was hit. The settlers tried to hit and take the cameras that were used to document the incident.

As internationals continued to document, the soldiers started picking out people to ask for their passports. They arrested one Palestinian from the village, one international from Spain and one from Norway, and harassed others by taking their passports for long intervals and threatening to deport them. The 23 year old Norwegian woman was arrested by three border police officers, hand cuffed and foot cuffed, and taken with the Palestinian and Spanish international to the Police station in the settlement of Ariel.

All arrested were released after a short time and no charges were made.

The residents of the community expect the settlers to return to complete the fence, and behave violently towards the villagers. They therefore invite international activists to be present at their village. Currently there are some internationals in the area but more are needed.

It was particularly important to stop the fence construction this day, as a court case is going on concerning the legality of the fence. Lawyers and judges were expected to come and inspect the premises the same day. The probable result of such an inspection was a “freeze” of the current situation. It was important for the settlers to freeze the situation with a fence and for the village to freeze it without.

The village of Jiftlik have had problems with the settlers from Massu´a settlement for several years. The settlement has stolen huge quantities of land over the years for the purpose of growing flowers. An area of the village which is inhabited by 200 people and several hundred goats and sheep only a couple of meters from the settlement’s greenhouses. Five years ago the area where the greenhouse is situated was part of the village. Now the settlers claim even more of the land from the Bedouin village to grow their flowers. To cleanse the Palestinians out of the area, the settlers tried to and succeeded to build part of the fence, thanks to the the Israeli soldiers and police protecting them.

The Jordan Valley is a forgotten part of the West Bank. The valley is neglected by the Palestine Authority, and overlooked by the international community. According to the Oslo accords, most of the valley is defined as area C, which means that Israel has total military and civil control. The inhabitants Jordan Valley are some of the poorest and most marginalized in the West Bank. They have limited or no access to civil services such as health care. All travel to and from the Jordan Valley is controlled by checkpoints installed by the Israeli Occupation Force (IOF). These checkpoints are difficult for Palestinians to pass, unpredictable and isolate the valley from the rest of the West Bank. The main road (road 90) through the valley, is only open for Israeli cars and Palestinians with permits, which is hard to get. The Jordan Valley is very fertile but requires lots of water. The settlements are easy to spot as they are the greener areas. The settlers have stolen local water resources, which leaves local Palestinians with few water resources, and the village that was attacked by the settlers have to buy their water from the settlers. Palestinians have limited ability to farm their own land because of the high prices of water. 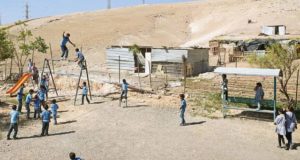