I met Ramadan and Sabrine Shamali at a Sheyjayee market a couple of days ago. They were going to buy new blankets, mattresses, and other essentials, including clothing, to replace what was lost when their house was attacked by the invading Israeli army during Israel’s war on Gaza. They were using money sent from those outside of Gaza in solidarity with Palestinians. 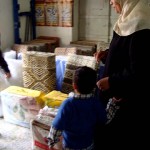 Sabrine Shamali trying to restore a home for her family 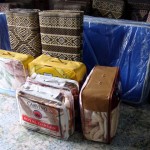 newly-bought mattresses, blankets and pillows to replace those destroyed by Israel’s attacks on Gaza 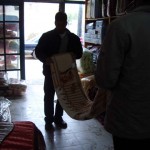 Ramadan knew the best place for blankets, a small store in the district, with blankets mostly brought in through sporadically-opened borders or, more likely, the tunnels. I was told that immediately after the war, when people were scrambling to replace burned and destroyed blankets, there were nearly none to be had, with the borders closed since November 4 and the tunnels out of order.

The mattresses were 170 shekels, pillows 25 shekels, and a large, woven floor mat 170 shekels.

Just replacing these items ended up costing the couple 1500 shekels, or about $365.

While the days have gotten warmer, nights still merit good blankets, particularly in a missile-hole-riddled house.

Needless to say, Sabrine and Ramadan were pleased to finally replace them, 2 months after their losses.

From there we headed to a clothing market in the same region, where items like underwear for the kids and sports pants, t-shirts, and other children’s needs were added to the bill.

They’ll still be living in a house most would consider not fit, not safe, for habitation. But such is the dilemma of so many here, where cement is on the banned list, held at bay by Israeli authorities from the Palestinians here who so desperately need it.