New
Home / Journals / They Will Not Go Down: Celebrating Life and Land Day

They Will Not Go Down: Celebrating Life and Land Day

Less than two months have passed since the end of Israel’s grisly war on Gaza. Not a house has been re-built (there is no cement; Israel continues to ban its entry into Gaza), thousands are displaced or sheltering in an overcrowded relative’s house or renting a scarcely-available apartment. The aid has stockpiled on the other side of crossings into Gaza, many trucks being sent back or expired. And the pain of loss, let alone of seeing family members -children, siblings, parents-burned by white phosphorous, being murdered or left to bleed to death is still unbearably fresh.

Yet Palestinians are trying to move on, again, while dealing with a siege which has only tightened post-destruction of Gaza. Last week Palestinian youths held a concert in the burnt-out theatre in one of the al Quds hospital buildings, attacked and seriously damaged by Israel during its war on Gaza [more than 14 hospitals and medical centres were bombed and damaged by Israeli army, 2 clinics were destroyed, 44 other damaged, and 23 emergency workers and medics were killed]. 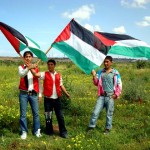 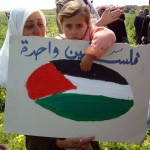 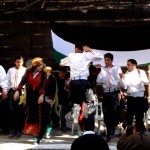 Dabka in the ruins of Quds hospital 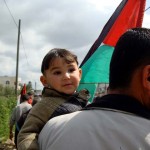 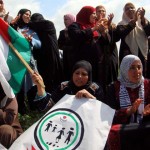 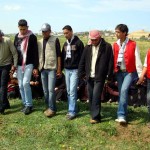 Dabka in the fields

Charred walls as a backdrop, piles of twisted metal, burnt rafters, and the ash of destroyed walls framing the stage, the next generation of Palestinian parents and leaders stood proud last Thursday, saying with their presence, as well as singing, “we will not go down”. The Michael Heart song written during Israel’s 3 weeks of attacks on Gaza caught the spirit of what Palestinians have been saying and living for decades, since the Zionists first began -even before Israel was created on the smoking ruins of Palestinian villages -their assassinations and acts of terrorism designed to frighten and drive out the existing Palestinian population.

On stage, a youth troupe of Dabke dancers held their own, did justice to the art that is Dabke. What was evident more than the skill of the musicians and dancers was Palestinians’ drive to live, to laugh, to show off and share their love of life. Just as with a concert organized by several youths last November to lift the spirits of Palestinians in Gaza living under a suffocating siege, the crowd clearly reveled in the opportunity for joy …after so much tragedy.

In Gaza’s northern Beit Hanoun region, Palestinians, led by women, marched to land in the Israel-imposed “buffer zone” to tend the remaining trees and proclaim their right to the land. The area once flourished with olive, lemon, orange, guava and almond trees, in the years before Israeli invasions razed them to the ground, simultaneously razing history and life. Following Isreal’s latest bout of destruction upon Gaza, most sources cite 60,000-75,000 dunams (1 dunam is 1,000 square metres) of fertile, cultivable land as having been destroyed by Israeli tanks and bulldozers. In Gaza’s perimeter areas, the “buffer zone” annexes land to Israel, gobbling up rich soil which had served Gaza’s agricultural needs. As of the last attacks on Gaza, as much as 60 % of the agriculture industry has been destroyed by Israel, further rendering Gazans aid-dependent.

Yet, again despite the gravity of the bleak situation Palestinians are facing, all over Palestine, on Land Day their voices were loud in protest, in defiance, and in joy. Organized by Beit Hanoun’s Local Initiative, a group leading agricultural and social projects in the northern region, Land Day celebrants sang, danced Dabke, tended their trees, and celebrated being on their land. On any given normal day, most of the residents would hesitate to go to this border region area due to the Israeli soldiers’ shooting which routinely erupts dangerously close to anyone on the land.