At least seven people, including one American and one Danish solidarity activist, have been arrested. One middle–aged Palestinian resident was thrown into a police car with severe bleeding to her head and nose after being roughly handled by police. 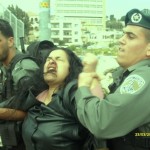 Mrs abu Khdeir being violently arrested outside of the protest tent 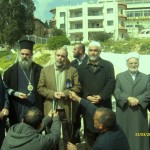 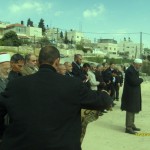 Around twenty policemen arrived at the protest tent in Sheikh Jarrah, which was erected to protest the evictions of Palestinian residents in the neighborhood. House evictions and demolition orders number in the hundreds in areas of occupied East Jerusalem, including Silwan and Shu’fat refugee camp.

In November 2008, the al-Kurd family was evicted from their home, and 27 more housing units in the neighborhood also face eviction. The Sheikh Jarrah community has created a tent to protest these pending evictions and to demand that the al-Kurd family be allowed to return to their house. Organizers of the banned Jerusalem Capital of Arab Culture festival attempted to hold an event at the tent as part of a year of celebration of Arab culture.

The police began beating the crowd, most of whom consisted of male residents of the neighborhood as they were praying outside of the tent. At this time, at least seven people, including three female community residents and the two solidarity activists, were dragged off and put into police cars.

Israeli Authorities have banned the festival from taking place in occupied East Jerusalem, which started on the 21st of March. At least 20 organizers have been arrested for attempting to celebrate Arab culture in the city of Jerusalem over the past two days.