Journal: Riding with ambulances from tonight

Last night E and I accompanied Dr Halid on the dark walk from Al Shifa hospital (his day shift) to Al Quds hospital (his night shift); he didn’t expect to find a taxi to take us, as our destination had a lot of government buildings which had recieved many strikes. 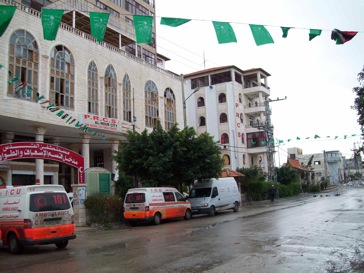 His route attempted to avoid the main targets. “Let’s go this way to avoid the Jawizat,” Dr H said. “Where exactly was that?” E asked. “Oh well, let’s go past it so you can see it,” he offered, Arabic hospitality to guests immediately outweighing any concerns of being underneath a missile. The Jawizat was one of the police academies that were having a training day, and between 45-50 young men were killed there in the first ten minutes of attacks.

At Al Quds hospital we met the Red Crescent Ambulance folks, who have set up their operations room in a hospital office. Two doors away, they have a perfectly good Red Crescent Operations Centre, but it has an unexploded missile in it, so it is hard to tell how much longer it will remain perfectly good for. I get the impression that whoever might once have been the person to ring to defuse unexploded missiles probably is no longer alive after all the police station strikes. The building in between the hospital and the Red Crescent Operations Centre is a Social and Cultural Centre also funded by them, with an emergency section on the ground floor. This building has various pieces of it falling off. And all of this is a result of there being – last week, anyway – another police station, the Muqa’ii, just a little further along in this line of buildings. Now it is reduced to rubble, again in the initial air strikes on Saturday December 27th.

S from the hospital told us about some of the supermarket customers across the road from it, killed as a result. “A 17 year old patient of ours had his father visiting. The father had gone to the supermarket to buy some things for his son. He was killed. And there were children just let out from Zahwa School. I found two girls, aged 9 and 12. One died quickly of abdominal injuries. The other was missing part of her head and shoulder when I found her. ”

We are here to arrange for internationals to ride with Red Crescent Ambulances (along with government ambulances and any other relevant medical vehicles) throughout the Gaza strip. Everyone we have spoken to first reinforces how dangerous this work is, and then gratefully accepts; in the hope an international presence will protect the medical workers whom the Geneva Convention ought to be strong enough to protect, but isn’t. Two are dead in the last days. Israel seems to be following a two-strike pattern also – bombing a particular location, then hitting again during the attempt to rescue the trapped and injured.

After the details are sorted out, our new colleagues insist it is too dangerous to walk or drive back to our home, and provide us with tea, dinner, and a comfortable room to ourselves for the night Its windows are broken, but so are pretty much all the windows in Gaza city, including our apartment building after bombing today. And there are lots of blankets. E and I feel very taken care of, as we always do in Palestine. What feels like extremely close rocket strikes begin just after I get into bed, and the door is pushed out of its frame by the impact. The staff come to see if I am frightened, and to karate kick the door back into place.