Ramatan TV, nine floors up and open 24 hours, was the last bastion of internet during the strikes. We knew the place because we got asked in for interviews, and then called a few press conferences there, for example announcing that internationals would be riding with ambulances. We began to hang around in the corners at other times, hoping no-one would mind us hitching a ride on the wifi. 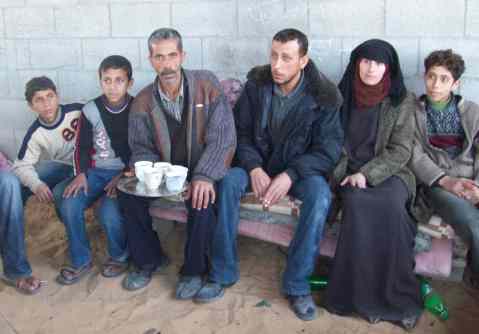 Instead of complaining about random internationals cluttering up the place, Ramatan journalists wholeheartedly adopted us, brought us tea, gave us blankets if we needed to stay the night. Now most nights at about 9pm, you’ll find some of us there being fed a small feast in the kitchen.

I forgot that I didn’t like journalists much, because these guys are firstly Palestinian, and their reporting is compassionate. Now journalists are flooding in through Rafah (though I do like some of them) I was reminded. Two days ago a recently arrived Channel 4 guy came into Yousef’s office on a deadline, wanting to know how many children died in the UNSRA schools. Youself said “Two children at one school. Forty five people at another…”

“But how many of them were children?” he insisted.
“Forty five people altogether,” Yousef said, thinking he’d misunderstood.
“No,” Mr Channel 4 said irritatedly, “I want to say the number of children.”
“Oh £*$&%*&@$ @*%@&*£.” I said, and stomped off, remembering my former journalist feelings.

Yousef Al Helou has the end office in Ramatan. His TV speaks English sometimes, and he’s always willing to pool information and help us figure out what is going on. Today he took me and E to Zaytoun to hear the story of his cousin’s family. When we arrived, I realised we were only two houses from the first house we’d evacuated people from on the Red Cross evacuation I went on. I would have walked past Amer and Shireen Al Helou’s house that day. But by then it was empty and broken, because the day Amer told us about was January 4th.

Amer is 29. 14 people from his family were in the house that night, and they were all trying to sleep under their stairs as some sort of shelter. Even though the stairs were partly open to the back yard, the F16 attacks on the house made downstairs seem the safest place. The house now has holes from shell blasts and thousands of pock-marks from the three inch nails that the shells were filled with.

“We hadn’t known how bad it would get,” said Amer. “Or we would have left our house and gone somewhere else. But we thought our area was a quiet area. And then that night we thought they would go past us at the front. But they came from the back.” Amer didn’t know it yet, but his brother Mohammed had already been killed elsewhere that day, struck by drone rockets.

army shooting in house just before 6am Jan 4

The Israeli soldiers came to their house at about 5.30am, after the house had been shelled for 15 hours, and immediately opened fire on the family, killing Amer’s father with three shots. Then they told the family to leave. Amer had called an ambulance (which had to turn back after being shot at) and was refusing to leave his father’s body but the soldiers said they would shoot him if he stayed, so they fled 300 yards up the dirt track behind their house, at which point they were shot at again by another group of soldiers. This time Amer’s brother Abdullah was shot, Amer and Shireen’s 6 year old daughter Saja was shot in the arm, and their 1 year old daughter Farah was shot in the stomach. They spent the next 14 hours sheltering behind a small hill of dirt, while the wounded bled, and were not allowed to access help though the soldiers were aware of the injuries. Having no other way to comfort her small daughter, whose intestines were falling out, Shireen breastfed Farah as the little girl slowly bled to death.

After 14 hours, at about 8 in the evening, the soldiers sent dogs to chase them out of their shelter and dropped phosphorous bombs near them, but due to the wounded family members and having bare feet in an area of broken glass and rubble, escape was difficult. The army took the three wounded and put them behind the tanks, and captured Amer, but the rest of the family managed to get away and call the Red Crescent. The ambulance that eventually reached the injured people 7 hours later (driven by my medic friend S) took an hour to find them, and by this time Farah was dead. (When I heard Amer’s story I realised S had already told me about collecting “a small shaheed” from this area.)

Amer was held for 5 days in army custody (the first 3 without access to food, water, or a bathroom), beaten and tortured, and questioned about resistance activity which he knew nothing about. When he was finally released on the border, the army sent two known collaborators to escort him, so it would look to the resistance fighters like he himself was a collaborator. But the fighters knew who he was and that he was not a collaborator. He tells us:

“I had my four children young, and they gave me the most happiness in my life. I took such good care of them. I didn’t let them just play on the street, we had a big living room in our house with toys for them, we would invite all the neighbours’ children to come play there with ours, so that we could be sure they were all safe. I always drove them to and from school, I didn’t even let them walk. Whenever I was depressed, I would gather all my kids, pile them in the car, take them somewhere nice like the park or the beach, and then to see them happy and having fun would make me happy again.

Now my remaining children will not go to sleep without their shoes on, because they think we will have to run for our lives again.

Amongst their crumpled belongings, next to the spot Amer’s father died, the family gives us tea. Shireen solicitously dusts the sand off my back. We ask them how it is they have not gone crazy from the pain of these events. “It’s not us, it’s God who gives us peace and strength. Without this I would be dead too. What happened to my family was like a horror film.” says Amer. He shows us photos of Farah (whose name means “joy”) and Saja on his phone. “I don’t think I can have any more children. I am too broken inside.”

The family is not living in the house right now, they are split between different homes, and Abdullah is in hospital in Egypt. Amer is wearing Abdullah’s jacket, complete with bullet holes. “It is hard to be here again in this house after what happened. But your presence has lifted my spirits.” he tells us.

Back at Ramatan, I hear one of the journalists talking. “I couldn’t protect my children – this is my responsibility, and I couldn’t.” He says. “My daughter asked, what is it like to die? I told her, it’s just like closing your eyes.”