Israeli forces have again demolished the protest tent established in Sheikh Jarrah, Occupied East Jerusalem, built on Palestinian private property in support of the evicted al-Kurd family and the 18 Palestinian families who currently face eviction from the neighbourhood. 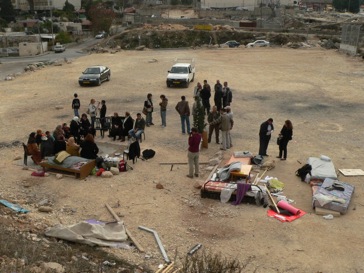 Two international solidarity activists, one British and one Austrian, who had been staying in the tent, were detained by Israeli police and taken to the local police station for their details to be taken. They were released three hours later.

Israeli forces arrived at the site of the protest camp at around mid-day and began to dismantle the tent despite the protests of Sheikh Jarrah residents who repeatedly pointed out that the tent is built of private property. The police then took two of the international solidarity activists from the site. They were released from the police station three hours later.

Um Kamel al-Kurd, who was evicted from her home of 52 years by Israel had this to say following the most recent demolition of the Sheikh Jarrah protest camp;

“This time there were no order, no paper no reason for the demolishing. Before they referred to either lack of permit or an act of law; any objects that destroy the natural beauty in an area can be removed. This is a law that they did not use since 30 years but now they have implemented it again. Today they only claimed that this is public area”.

“I am sad to see the tent being demolished again. Also I am very frustrated, because we have no means to stop this.”

“Still I am resolute, I will maintain here and if they return to demolish again, we will rebuild it again”.

“Where are the conciousness, where are the hearts of the world? Why are they not defending us and helping us to return to our home?” 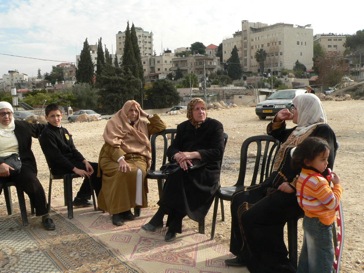 The protest camp was established by the Sheikh Jarrah Neighbourhood Committee following the violent eviction of the al-Kurd family on the 9th November initially to show support for the evicted family and the 500 other Palestinians who are under threat of eviction from the neighbourhood. It has been demolished three times already by Israeli authorities despite being situated on private Palestinian property.

The camp has been used as a cultural centre for the Sheikh Jarrah neighbourhood, regularly screening films, holding traditional Palestinian dancing and showing Palestinian photo exhibitions. The latest demolition of the tent can be viewed as another effort by Israel to react against displays of Palestinian national identity within Occupied East Jerusalem.

A previous protest tent had been active throughout the Summer on the al-Kurd property, as widespread international condemnation of Israeli policy against the family and neighbourhood grew, including an official complaint from the US State Department (see below).

Abu Kamel al-Kurd was immediately rushed to hospital following the family’s violent early morning eviction with high-blood pressure. He was re-admitted to hospital two weeks later where he died of a heart attack homeless.