On Tuesday, December 16, 2008 at 1.00 in the morning, the IOF raided the home of the Al-Salabi family in Beit Ummar. About forty soldiers came to the village located near Road 60, south of Bethlehem. 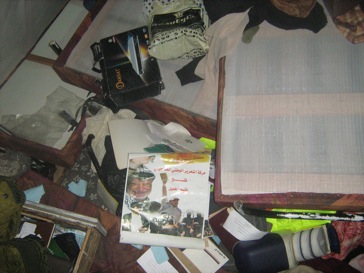 Two soldiers remained by the door, as six soldiers forcefully entered the house. The entire family, parents and their five children, were pushed outside. They were made to stand outside in the cold for two hours, the soldiers refusing to permit them to obtain their jackets. The soldiers ransacked the house, throwing the family’s belongings unto the floor. They took a dresser out of the wall to search by the wall. The soldiers asked the father if anything was hidden in the home, repeated saying “if you remember, tell us”. They left at 3.15, arresting one of the sons in the family, Ala’ Al-Salabi.

The soldiers refused to explain why Ala’ was being arrested or where they would take him. Ala’ is only 19 years and one of the 17 arrested on Tuesday night. Later disclosed to his lawyer, Ala’ was taken to a prison in the illegal settlement of Gush Etzion and accused of throwing stones, molotov cocktails and selling bullets.

The proximity of Beit Ummar to a Palestinian road exploited by settlers traveling south in the West Bank is behind the campaign for arrest. About 200 people, of the 13,550 living in Beit Ummar, are currently in jail. Most are accused of stone throwing because of Road 60.

In January 2004, Israeli occupation forces cut down many olive trees along part of Road 60 close to Beit Ummar and Al Arrub. The intention was to build military towers to monitor the road. Furthermore, Al Arrub College was given a military order on November 28, 2007, to stop construction of an additional building to the college. A 50 to 75 meter no construction zone is enforced near all Israeli utilized road. However, the many homes that were already built near Road 60 are either unable to get permits to expand or being demolished. To stunt the growth of Palestinian villages and infrastructure is arguably the Occupation’s way of ensuring the growth of its own illegal infrastructure in the West Bank.

In an endless campaign to secure infrastructure for settlements in the West Bank, the Israeli government is responsible for the warrant-less arrests in Beit Ummar. The confiscation of land next to the road and a campaign to arrest people from the surrounding villages are results of claiming a Palestinian road for illegal settlements.