Journal: One family’s fear and heartbreak in Gaza 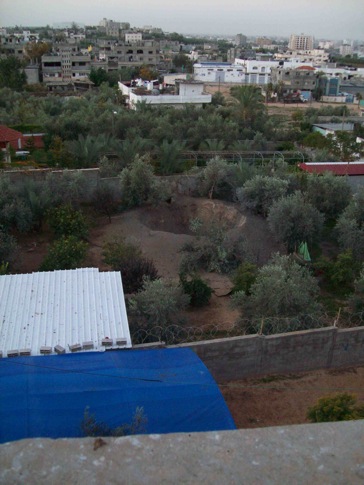 In the basement, the family begins the night at their allotted sleeping spaces, but as the hours pass, draw closer together until women and children are huddled together in a pile of blankets. The women have slept little, and look exhausted. There are 5 or 6 children under the age of 5, tousled hair and solemn faces. The oldest boy’s face is pinched and distorted with anxiety.

Multiple reports that Israel is phoning people at home, telling them “any house with weapons in it is a target and should be evacuated.” And the usual calls about “return Gilad Shalit and everything will be just fine”; as if any of these civilians know the first thing about his detention. If they answer “we don’t have any weapons in our house and we don’t have Gilad Shalit either,” will Israel just bomb the next door neighbours instead?

At 4.30am – deafening bang, flare of fire, some of the windows break, the children shriek and each mother grabs her child. One of the young women was on the basement stairs, and she is carried in, sallow with shock and fear, to be cradled by one of the older women. I give her honey sweets, since the more desirable sugary tea appears beyond anyone’s capacity to produce right now, perhaps there is nothing even to heat water with. We cautiously venture up the stairs; an unfeasibly large crater has appeared beside us, courtesy of an F16. Olive trees are the only casualties, but this is a little field in amongst residential houses. There is nothing here that even Israel, whose definition has always been broad, could begin to describe as a legitimate target.

“Where is grandma?”, asks one of the little girls. Grandma represents sweets and other good things, which would be pretty welcome right now. “Grandma is in paradise,” is the weary answer. This past morning no-one could find any bread in the nearby shops. Sara Eid Al Hawajri set off determined to track some down to feed the grandchildren. The first sweep of attacks at 11am caught her in the street, and left her covered in dust, dead from shrapnel. Eva (Canadian ISM volunteer) knew her, she was a friend of her son (who himself has lost both his legs) and of her daughter-in-law, who now feeds her small boy under the blankets beside me.

We came to pay our respects, but fearing an Israeli army incursion as happened to them before, the family asked us to stay. Sara’s teenage daughter is helping care for the children, but when things are quiet her face drifts into blankness.

In that first sweep of attacks, in approximately 10 minutes, we understand that 205 people were killed and more than 700 injured. Most government buildings and other social infrastructure were destroyed. 80 Israeli planes and helicopters were involved in the attack and over 100 bombs were dropped. So before tonight began, the hospitals and mortuaries were full, the staff overwhelmed, the medical supplies exhausted. It will be dawn soon and it is hard to imagine what we will find with the daylight.