Gazan fishermen protest for their rights

The ISM Gaza Strip team joined over 50 Palestinian fishermen on a demonstration to call for an end to the siege of Gaza – both on the land and in the sea. As Israel’s stranglehold tightens day by day, Gazan fishermen and farmers struggle to provide a local food source for a population under siege. This is in the face of arbitrary restrictions imposed on them by Israeli occupation forces. 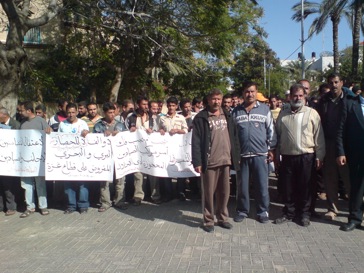 Israel has declared a six-mile limit on the Gazan fishing zone, contrary to prior agreements and international regulations. This limit is dictated solely by the gun and Gazan fishermen endure daily aggression from Israeli naval gunboats, resulting in injuries and damage to their boats. 15 fishermen have been killed by the Israeli navy since 2000. 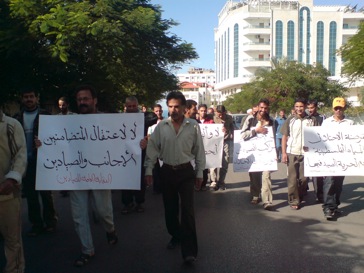 The fishermen also protested against the abduction of 15 of their colleagues from Gazan territorial waters on 18th November, who have since been released. They demanded the return of three of their trawling vessels confiscated by the Israeli navy during the same operation, depriving hundreds of people of a livelihood. They also opposed the illegal detention of three International Solidarity Movement volunteers who were accompanying them at the time.

Fishermen carried banners with slogans including:
“No to the occupation piracy in Palestinian waters. Yes to fishing freedom.”

The fishermen marched from Gaza City port to the headquarters of the United Nations Relief and Works Agency, where they spoke to a UN representative. There were also speakers from the Fishing Syndicate, PNGO and the Palestinian Campaign against the Siege.