To view original article, published by Ynet on the 17th October, click here 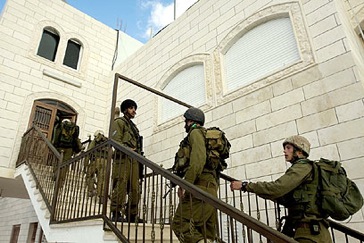 The mitzvah of this holiday requires Jewish families to reside in their sukkah for seven days, but for some Palestinians this Sukkot means being forced to live in a small room for days. This was the case for Sultan family from Hebron, who said they were held captive in their home since Tuesday morning and were subjected to shameful treatment. The army, after confirming the troops had already left the house, vehemently denied the accusations.

IDF troops commandeered the family’s house as part of the army’s preparations for the arrival of numerous Israeli visitors to the city. The family members claim that despite initially being told they would only have to remain confined to the room for 24 hours, the soldiers have yet to leave the house.

Among the household members is Anha’ar Sultan, who is four months pregnant. “A large IDF force came into our house at four in the morning. About 40 soldiers came in and told us that they intended to stay until the next morning, under a military decree. They shut me and my one-year-old daughter in one room, and my husband and two brothers-in-law in one room with a kitchen – and we were forbidden to leave, or even open a window,” she told Ynet.

However after Israeli peace activists and the B’Tselem organization intervened, Anha’ar was allowed to leave the house. Her husband and his brothers are still being held in the house.

“A soldier sat in the hallway near the room and wouldn’t let us shut the door. He didn’t take into account that we need to sleep, or that there are women in the house. We couldn’t breathe, my one-year-old daughter collapsed because of the conditions, and when I begged to take her out onto the balcony they said no,” continued Sultan.

Sultan said that on Wednesday morning the family was sure the operation had ended, but then a different force arrived and refused to explain why the house was still being used.

“They were not polite and when we asked for help there was none. They wouldn’t even let us give the ewe in the yard food or water.

“I don’t know if because these were three days of hell I won’t have to get an abortion,” she said.

The IDF responded to the claims: “The soldiers’ presence in the house was an operational necessity, the sole purpose of which is combating terror.

“After the soldiers left the house they cleaned it and restored it to its original state. During the time they resided in the house the soldiers used a side room, and allowed the family members to exit the house and return to buy groceries and feed their sheep. As for the pregnant woman, the request to release her was transferred via the Red Cross to the Coordination and Liaison Administration – and was then granted.” The army denied other organizations had been involved in the handling of the woman’s request.