Palestinian farmers in Kufr Qaddum were stoned by settlers as they attempted to enter their lands on Sunday 19th October, and found olives and equipment stolen. 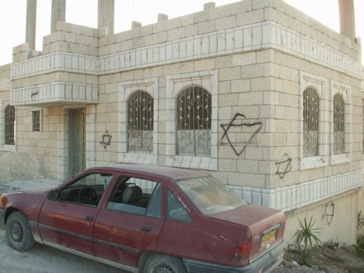 A group of 9 male youths, known widely as “hilltop youths”, from the illegal Israeli settlement of Qedumim, harassed and threw stones at farmers and international activists, yelling “This land is ours!” To the accompanying activists, one called threateningly, “You in the blue shirt – be careful!”. The youths, who have built a Sukkah (an outdoor temporary dwelling used during the holiday of Sukkot) on the hill of the lands belonging to villagers from Kufr Qaddum, menacingly approached the farmers and activists, unhindered by the Israeli soldiers who merely stood by, doing nothing.

The owner of the land, the mayor of Kufr Qaddum, Mohammad Abu Nimah, called to the soldiers as he first entered his lands, demanding that they keep the youth under control. The soldiers ignored this, and it was not until Abu Nimah phoned the Isreali District Coordination Office (DCO) and higher-ranking officers arrived, that the soldiers at the site began to reign in the boys.

When the unit commander was questioned as to why the soldiers at the site had failed to respond to the attack, he simply shrugged. When pressed on the issue, he would only stare at his boots. The soldiers who were stationed at the site then advised Abu Nimah that he shouldn’t come to his lands, because the youth will make trouble for him. Abu Nimah dismissed this idea as ridiculous – “These are my lands”, he said. “Why should I not come here?”. The commander of the responding army unit claimed that if they removed the youth from the lands, they would simply return, inferring that there was nothing the army could do.

The hilltop youth, known for their beligerant Zionism that spurs them to erect illegal outposts in order to steal greater tracts of Palestinian land, built the Sukkah at the beginning of Sukkot, and so will remain on the hilltop for another two days at least. The commander advised that according to Jewish religious customs, “They must sleep, and play in there”, despite the fact that the land does not belong to them.

Upon arriving to the bulk of his land, Abu Nimah discovered that olives from three of his trees had been stolen by the youths overnight. Pointing to the broken branches, his wife, Kafah, explained “Here they have used a stick to beat the olives from the tree”. It was then discovered that two sacks of olives had been stolen, one from Abu Nimah and one from his brother whose land lies adjacent. The couple explained that one sack contains 60 kg of olives, and produces 15-20 litres of oil, depending on the quality of the olives. Also stolen were all of the harvesting implements belonging to Abu Nimah’s brother, and all of the olives from neighbours’ trees. Kafah surmised that the stolen implements had been used to harvest the olives from her’s and her neighbours’ trees.

When going to make breakfast for the family, Kafah then found that all of the plates, glasses and the kettle for making tea were also stolen. “We leave these here at night”, she explained, “because we have to come a long way; one hour walking each day. It is too difficult to carry. I went to take one [plate] for [serving] potatoes, it is gone”.

This is but the latest in an escalating series of attacks by settlers on the people in Kufr Qaddum. On Thursday 16th October, settlers burnt lands belonging to Fathi Amer, and stonings and harassment have been reported daily.