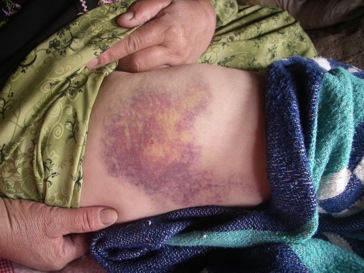 The five settlers went through the valley and approached the shepherds while yelling insults at them. They then began throwing stones at the Palestinians from a distance of 10 metres. Two of the settlers grabbed one of the boys and the other three threw stones at him. The mother of the shepherd was nearby in her tent. She saw the settlers beat her son and went towards them scared for his life. One of the settlers threw a big stone at her that hit her thigh, causing her to fall to the ground. Other Palestinians then arrived to try to protect the family from the attack. 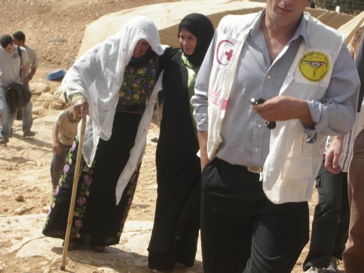 The confrontation continued for around 40 minutes, with both groups throwing stones at each other. Meanwhile other Palestinians had called the police, but they arrived half and hour after the settlers had left the scene.

Four Palestinians were injured from the assault, but the most critical was Haje Ehreni who after she fell could not walk on her leg. She was taken with her son to the public hospital in Yatta. It is the second time she has been attacked by settlers and hospitalised.