About 80 international, Israeli and Palestinian protesters gathered at the Erez crossing to the Gaza strip on Sunday to demonstrate against the Israeli government’s denial of entry for health professionals planning to attend the International Gaza Community Mental Health Program Conference. 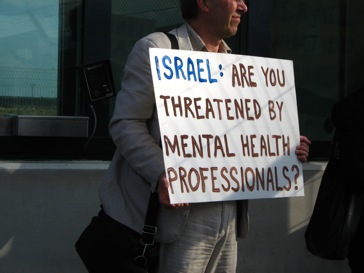 Multiple armed border police pushed the protesters back from the fence of the crossing as demonstrators asked to be permitted entrance during the hour and a half demonstration which was otherwise allowed to occur with little interference from the authorities. 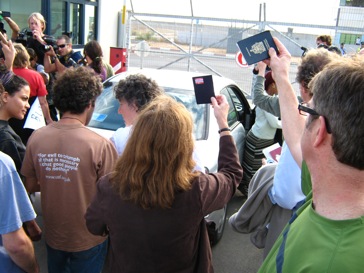 The conference, which was to occur on the 27th and 28th of October in Gaza City was forced to be held in Ramallah with lectures performed through video-conference with the participants in Gaza. The conference’s focus was on the mental health issues resulting from life under the siege entitled “Siege and Mental Health, Walls vs. Bridges”. Mental health professionals from around the world were scheduled to present lectures focusing on the many ways in which military occupation in Gaza and all over the world affects mental health and hold a professional and academic dialog on solutions to the issues. 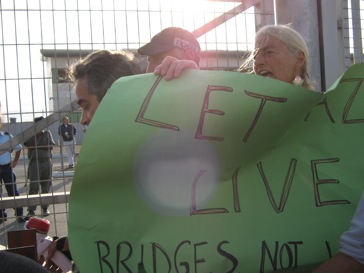 The demonstrators on Sunday not only expressed their rejection of Israel’s actions in regards to the conference, but also on medical treatment of Gazans as a whole. Immediately after the start of the siege in 2007 the Israeli government has exercised a more than 20% decrease in the issuing of medical permits, leaving only 69% of applicants with a permit to enter Israel. Even when a patient is issued a permit they are often subjected to lengthy security checks at the crossing where it is known that Israeli authorities pressure them for information in exchange for their exit. Furthermore the health system within Gaza is in need of many vital supplies that due to the siege are routinely impossible to obtain. Multiple human rights and international medical organizations, including Physician’s for Human Rights have filed petitions against Israel’s actions as an occupying force, which are in a direct violation of the Geneva Convention.

As several representatives from the conference spoke at the end of the demonstration they stressed the fact that their work at the conference was in no way politically affiliated, rejecting claims made by some Israeli sources that it was sponsored by Hamas. Those who spoke instead insisted that they were invited by the Palestinians in an attempt to exercise their academic freedom on an important issue and that the Israeli government’s denial of their entry points to what they must be attempting to hide from the international participants, many of them carrying signs asking “what are you afraid of?”. The representatives finally asked that those present continue to pressure their home countries for a change in policy towards the human rights violations being committed in regards to medicine in the Gaza strip, an issue that can no longer be ignored.