Soldiers operating in village of Asira al-Kabaliya, which was attacked by settlers Saturday, find group of left-wing activists in one of houses. ‘It was our duty to arrive and express our solidarity with the residents,’ explains activist Yonatan Polak

To view original article, published by Ynet on the 14th September, click here 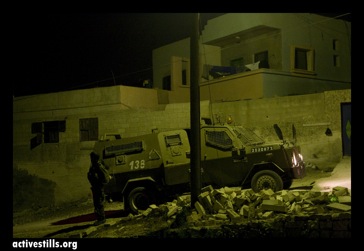 An IDF force which raided the West Bank village of Asira al-Kabaliya near the settlement of Yitzhar on Saturday night, apparently as part of an operation for the arrest of wanted Palestinians, was surprised to discover a group of left-wing activists in one of the houses. 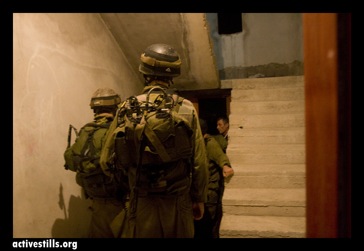 The activists arrived in the area following the riots which broke out in the village Saturday after a Palestinian stabbed a nine-year-old Jewish child and settlers flocked to the village and caused heavy damage.

The IDF force is believed to have operated in the village in the night in a bid to locate the Palestinian who stabbed the child. The troops were surprised to find a group of Israeli left-wing activists inside one of the houses they searched.

The force informed the group that the village was under curfew and inquired about the reasons for their arrival.

One of the Israeli activists, Yonatan Polak, told Ynet that he and his friends had arrived in the village in order to express their solidarity with the residents and attempt to reduce the level of violence.

“I saw with my own eyes settlers throwing stones on Palestinians, with soldiers standing by and doing nothing. Six people were injured here yesterday from live ammunition, and it was our duty to come here and express our solidarity,” he said.

According to Polak, the troops did not cause damage in the house where he was discovered with his friends, but claimed that the entire content of a neighboring house raided was thrown onto the street and that the soldiers caused damaged to property.

The IDF Spokesperson’s Office has yet to respond to the claims.

The violent clashes in the area Saturday began in a stabbing attack which left a nine-year-old child from Yitzhar lightly injured, after a Palestinian infiltrated the settlement and set fire to an empty building.

The Palestinian then entered another house, stabbed the child five times and threw him off a 2-meter (6.5-feet) high balcony.

Following the incident, dozens of settlers raided the village of Asira al-Kabaliya, fired in the air, shattered windows, caused damage to property and injured several Palestinians.

IDF soldiers confiscated the weapons of two settlers, but did not arrest them.

According to the Palestinians, six people were wounded by live ammunition and rubber-coated steel bullets. Although the cartridges were found in the area, the settlers denied firing in the village.

The settlers claimed that the chain of events was the result of an IDF failure, as one of the soldiers had spotted the Palestinian arriving at the settlement but failed to do anything about it.