On the 31st August, one and a half year old Omar almost died from suffocation as his journey from Susiya to hospital was prolonged from 5 to 20 minutes due to Israeli road block. Sunday afternoon Omar had caught a fever which caused his tongue to swell up and and fall back blocking his windpipe. As a part of the reaction his brain went into shock and closed his mouth. In order to save the boy from suffocation, it was crucial to get him to the hospital as quickly as possible. 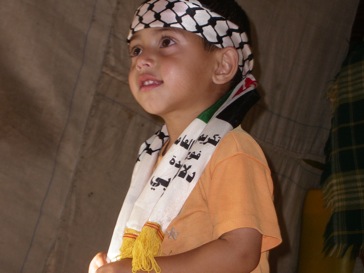 Under normal conditions it would take the family 5 minutes to drive the direct road to the Al Er Demat hospital, but this road has been closed by a Israeli roadblock for the past 8 years. As Susiya is in Area C the Palestinians have no authority to build and repair roads without Israeli authorisation, which meant the family had to use an old dirt-road to get to the hospital. Even though they raced over the dirt-road to get to the hospital in time, the journey was still prolonged by 20 minutes.

Omar was only saved because his uncle managed to open the boy’s mouth and get his tongue out of his windpipe during the drive. Otherwise it would have been too late before they got to the hospital. When arriving to the hospital Omar was quickly taken care of and after spending 2 hours there he was discharged.

A similar incident ended fatally last year in the neighboring town of Tuwani as a 14 year old girl died from suffocation on the way to the hospital.

These two incidents are only examples of problems caused by the restriction of movement that Israel has imposed on the Palestinian population.

In 2007 the number of permanent checkpoints averaged 102 a month. On top of this, the army sets up dozens of temporary “flying” checkpoints every week. In addition, Israel has blocked access to severel main roads.