Well here on baking, blissfully breezy Crete it has been a day of high expectation and yes, again, disappointment. 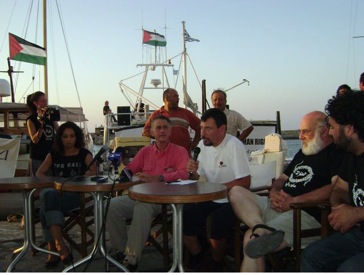 I spent my first night on board last night, in water so calm it reminded me of Lake Geneva. Our group had enjoyed a late dinner with sympathetic locals in a communal dwelling in what was once Chania’s law court and prison. A touchingly run down setting of past grandeur, with a vegan feast thoughtfully prepared. Music was provided by an elderly man singing in Spanish, accompanied on the guitar by a young man with dreadlocks = known only as ”citizen of the world’. I finally arrived back on the boat at 2am certain I could sleep even standing up (much less lying down on a foam mattress). Chania is a rather lively dock even on Monday nights. The nearest taverna was hosting a family celebration complete with Greek musicians, the clink of moonlit glasses and much enthusiastic chatter. Suffice it to say I decided to find a vacant cabin. These are basic, unless you lived your life trawling for sardines. 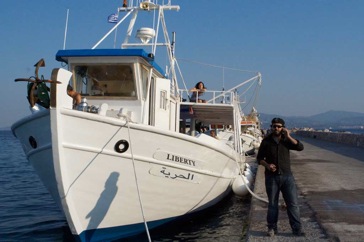 An hour later the alarm on my mobile phone went – time to take guard of the ships with Jeff Halper, anthropologist and founder of The Israeli Committee Against House Demolitions. The ships are never left vacant, the risk of sabotage being considered too high. Our turn as guardians of the Free Gaza and Liberty consisted of patrolling with a torch and talking noisily about subjects I was too tired to remember afterwards. However, knowing Jeff I’m certain they were both funny and profound.

The early morning meeting saw most sailors bright eyed and eager to sail, making plans for the longest leg of the journey to Gaza; the 3 day odyssey from the legendary isle of Crete to Cyprus. Both ships now have professional captains. Matthew who arrived this morning fresh from a private tour of the Greek islands looks very young (I have insisted he grow a beard to look older than seventeen) he assures us all that over three days his face will age. In fact Matthew is in this thirties with a wife and children and knows the waters between the Greek Islands intimately, the groups are very pleased to welcome him aboard. Having spent the morning studying the charts and the local shipping forecast (weather report) at 11 am Captain Mat (as he shall now be known) announced ‘Friday night is the perfect time to sail. Before that the journey in these vessels from Crete to Cyprus is not so much dangerous as suicidal.’ 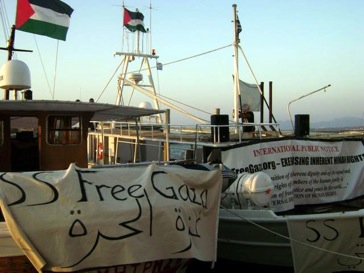 What did we do here in Crete at that announcement? For half an hour nails were chewed, each person went into a private purdah considering personal situations, the financial implications of staying longer, the commitment to those hoping for boats of hope to arrive on their shores. I know that the equally keen volunteers in Nicosia have important business commitments they have already delayed time and again for this mission. The news must have hit them hard.

Soon, everyone put the delay aside deciding how best to use this extra time to prepare. Huwaida and Courtney (please see biogs to find out more about them) are keen to brighten up both ships. Both locals and tourists who stop in front of both boats pointing and saying the word “Palestine’ are unsure they have found the ships they have either heard or read about. To remedy this, plans are afoot to paint the wheel houses in the red and green of the Palestinian flag, interspersed at Huwaida’s suggestion with words by the recently deceased Palestinian poet Mahmoud Darwish. 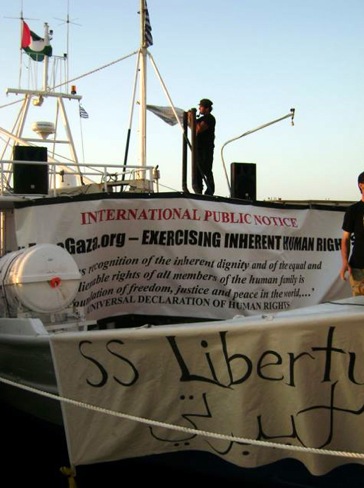 Practical preparations continue, this delay means more funding, for the project to break the siege of Gaza needs an urgent boost. Fifty travellers in two locations need to be fed and those in Nicosia need the rent for their housing to be covered in order to remain at the university longer than expected. Meanwhile here in Crete, despite the various pressures put upon them not one single person is leaving the project. How they cope financially with the pressure put upon them I have no idea. The single principle, the only thought on the minds of those here this afternoon is that thousands in Gaza are willing on this small, independent project. It’s the people watching the horizon in Gaza that keeps everyone going here in Crete.

Meanwhile the world waits too to see what happens. Today Correiere Della Sera, a major Italian newspaper read by more than 2 million, devoted an entire page of their world news section to the Free Gaza Movement and the injustice suffered by Palestinians. The US media is the only group noticeable by their absence.

Free Gaza have the boats, the crew, and the willpower to challenge Israel’s illegal barricade. Now all they need is the weather.

Here is a message to the Gazans watching their sea for signs of ships: the Free Gaza Movement are on their way. When the winds are with them, nothing else should be able halt this mission of peace and goodwill.