At-Tuwani, South Hebron Hills: On August 2nd, more than one hundred children and their parents from the South Hebron Hills marched from the village of At-Tuwani to Tuba, calling for an end to settler violence and expansion in the area. 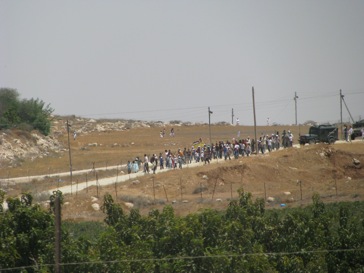 In a major success for the area, the children and their parents took the most direct path to the village of Tuba. For the past eleven years, school children escorted by the Israeli military have been the only Palestinians able to use this road. Palestinians parents organized the march to call attention to the violence faced by school children, the failure of the Israeli army to protect them and the effects
of Israeli settlement expansion. The march was a part of the annual South Hebron Hills summer camp for children.

The march initially attempted to take the path that children use when unaccompanied by the Israeli military, around the unauthorized outpost Havot Ma’on (Hill 833). The Israeli military declared the whole area a closed military zone and restrained the march with force, targeting leaders. Soldiers attacked and tried to arrest a Palestinian man. When a CPTer intervened, they knocked them both down and started choking the CPTer, but marchers nonviolently intervened and stopped the attack. One Israeli and one international member of Operation Dove were arrested. Palestinian organizers negotiated with the Israeli military and it was decided that the Israeli military would accompany the children and parents on the short path, using the road between Ma’on settlement and Havot Ma’on (Hill 833). A large group of settlers left Ma’on and harassed the marchers. A smaller group of settlers followed directly behind the marchers, but Israeli military and police prevented them from attacking the group. One village elder accompanying the children walked this road for the first time in years. Surprised by the settlement expansion, she
shared with a soldier about how she plowed this land years ago.

Participating in the march were children from the villages of Tuba and Maghaer Al-Abeed who have been regularly attacked by Israeli settlers as they walked to primary school in At-Tuwani. The children rely on an Israeli military escort to accompany them to school and prevent Israeli settlers from attacking them, but the Israeli military has recently declined to carry out their responsibility. The most recent settler attack took place on July 27th when the Israeli military refused to escort the children. Settlers flung rocks at the children with slingshots and physically assaulted CPTer Joel Gulledge.