Settlers from the settlement in Susiya attacked Palestinian shepherds and their sheep on the morning of the 17th of July with the purpose of clearing the land of Palestinians. Sheep were scattered and the army came and forced the Palestinians to leave without letting them go to the well to let the sheep drink. 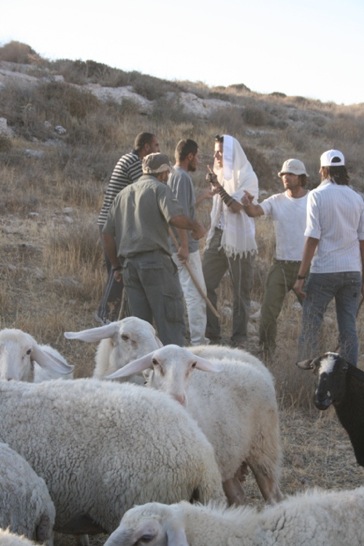 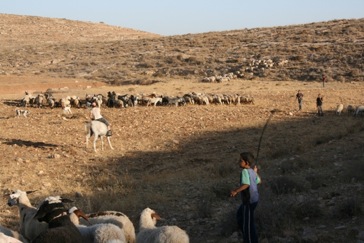 At about five thirty in the morning the 17th of July the shepherds from the community of Susiya went to grass their sheep on their fields between their tents and the nearby settlement. Shortly after they’d reached the fields, four settlers arrived. Three of them came from the road in a car and one came on a horse. The settler on the horse galloped to the grassing herds of sheep and went around and into the herds while shouting at the sheep which made them scatter. The three other settlers caused scattering through shouting to the sheep and shepherds to leave, through running around into the herds and throwing rocks at the sheep. 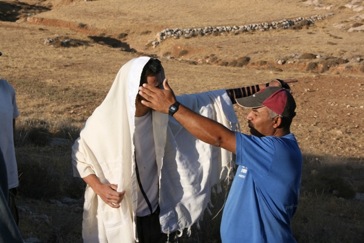 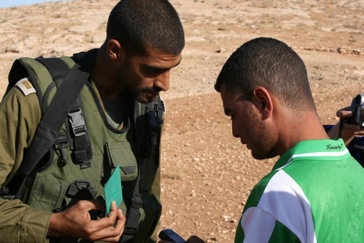 The Palestinians required a map of the area with marks on where they’re allowed to go and where they’re not. They didn’t get any answer nor map. The soldiers just told them to leave. The Palestinians moved away a bit but didn’t want to leave because their sheep hadn’t finished grassing. The army then took the ID’s of three Palestinians and told them they had to go to their homes, and that they’d been given their ID’s back later. Further discussions took place and two of the men got their ID’s back after leaving the field accompanied by the soldiers, but the third man the army forced to leave the area without his passport. This ID was given back later to another Palestinian.

During the soldiers attempts to force away the Palestinians, the riding settler was moving around and making people move as well as standing in the way for people who wanted to hear the discussions between the soldiers and the shepherds. More settlers had also gathered during this time, so six settlers were standing on the hill refusing to go back to the settlement, although the army asked them to. The army didn’t force the settlers to go back as they did with the Palestinians.

The attack was succesful for the settlers. The Palestinian shepherds and sheep had to leave their field and the settlers could stay. The Palestinian sheep weren’t allowed to go to the well and drink, but the settler goats were allowed. The Israeli police came to take report from the Palestinians of the attack. One settler also made a report where he claimed of having being abused by a Palestinian, who was arrested. International solidarity activists handed their video of the incident to B’Tselem who used it to hand to the police as evidence on behalf of the Palestinian. The Palestinian farmer was released without charge. The army finally declared the area between the settlement and the Palestinian tents as a closed military zone until tomorrow morning.