On Wednesday 9th of July and the seven days that followed, the small Palestinian farming community of Susiya have experienced varying degrees of exclusion from their land. Armed settlers and the Israeli army have jointly forced farmers off their grazing land. The week began with the army arriving and a discussion taking place where an Israeli soldier was quoted as saying “if you come back to this land … I will get you arrested”. 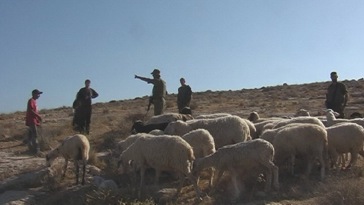 The following day the army came and blocked the shepherds from entering their land short of a well which provides the main water source for the sheep. During the discussion which followed, a meeting with a lawyer was arranged to take place on Tuesday 15th July. Friday and Saturday the sheep were herded without interruption in areas of Susiya which had previously not been grazed since some settlers attacked the community at night nearly two months ago. Sunday the shepherds were able to reach the well that they had previously been denied access to. However on Monday after the army had been contacted by the settlers two soldiers arrived at the end of the graze to issue threats of arrest to the shepherds. Tuesday’s grazing was cut short by the Israeli army who after being contacted by the settlers sent three soldiers to remove the shepherds from their land. This happened just before the lawyer arrived to further discuss the land rights of the Palestinian shepherds. This discussion however resulted in the Israeli army issuing a further warning to all the shepherds in the Susiya area, to wait until the discussion (which is likely to take weeks to be finalised) before they return to graze their sheep on the land under dispute.

This weeks conflict with the settlers and Israeli army takes place within a context of disputes stretching back to the original problem of illegal settlement building and removal of local Palestinians from their land. Until 1985 the community of Susiya lived mostly in caves in the historical village, before they were evicted and their homes destroyed and turned into a tourist attraction which doesn’t acknowledge their existence.

Since then the Palestinian inhabitants of Susiya have been living in tents, denied the rights to construct anything solid on their land without building permits. These permits have proved almost impossible to obtain, so much so that in all the 23 years which they have lived on their land not one Palestinian has been able to build a permanent house. One Palestinian showed a cave which he dug as a home for the winter, after not being able to obtain a permit for a house, the cave has been destroyed completely, twice now. Refused running water, electricity and a roof over their heads, the shepherds rely on taking their sheep onto their land on a daily basis and have found it increasingly difficult to feed them by other means because of the sharp increase in food prices.

Another side to the problems in Susiya is the violence that the shepherds face from the settlers, since the Susiya settlement was established in 1982 the local Palestinians have been attacked violently and frequently. This has resulted in more land being taken from the Palestinians for ‘security’, however, in certain places this land that the Israeli army claims is a buffer zone between Palestinians and the settlers has been used to further expand the settlement, activity which the Israeli army refuses to stop.

The situation today in Susiya is so tough for the Palestinians that many have chosen to leave their land, often their main source of income. For those who remain on their land are experiencing inequality at every level, from treatment by the Israeli army who massively favours and often works with to the settlers, to the amount of water they have access to, which in comparison to the settlers who have running water, and are able to irrigate their land, the Palestinians have barely enough water for themselves.