On Friday the 18th of July settlers from Karmeel disrupted an old couple in the village of Um al Khaer. This happened at about 11.15 am, when the couple and a donkey were on their way back from the fields after having collected wood. The settlers called the army, who soon arrived at the spot. The couple reported that the soldiers hit the old couple with guns and they also insulted the woman verbally.

At 12:15pm Israeli and international activists arrived and attempted to get in touch with the soldiers responsible for the assault. Instead a settler responsible for “security” met the activists and tried to unlawfully detain one of them. Following this illegal detainment an Israeli Human Rights Worker (HRW) tried to intervene, but was kicked to the ground by the “security” man from the settlement. 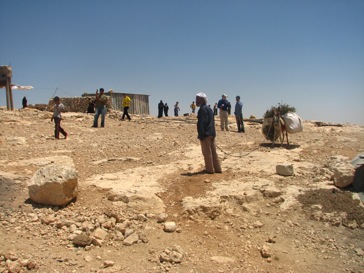 The attack on the elderly couple and other settler attacks is not the only problem the village has to deal with. The village “has been without water for four days because the settlers have turned it off” according to one of the villagers. The only water source they have access to is a well outside the village, but the water is not fit for drinking and cooking. 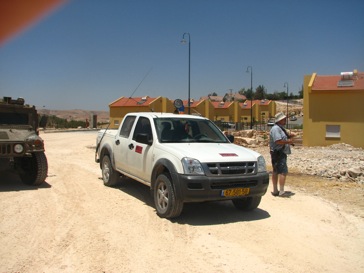 In the 1980’s Israeli settlers came to Um al Khaer and occupied land for a settlement which they named Karmeel. The original villagers were not allowed to build permanent structures so they have been living in tents next to the settlement since then. The Palestinian villagers have been harassed by the settlers ever since, but the problems increased when the Israelis expanded the settlement about five years ago. According to the villagers, the settlers and the army cause them a lot of trouble. They get harassed almost every time the try to reach their land with goats and sheep, and therefore have to walk a much longer route than they would normally take. Several times the Israeli police have arrested Palestinians, but they rarely trouble the settlers. “This is not a life”, the old woman, who was beaten by the soldiers, said.

The new part of the settlement, about ten houses, have hired a security guard. According to other villagers of Um al Khaer, “he is the main reason of these problems” that the villagers now experience daily.