Demonstrations against the wall and occupation of land have been held frequently in Umm Salamona outside of Bethlehem since April this year. Today, approximately 50 protesters, half of those Israelis activists and internationals, participated in a demonstration that started out in the main street of Umm Salamona. A peaceful march was lead towards the planned construction are of the apartheid wall but was stopped by armed Israeli soldiers and policemen barricading the road with razor wire. The demonstrators chanted and tried to communicate with the soldiers but were not allowed to proceed further. 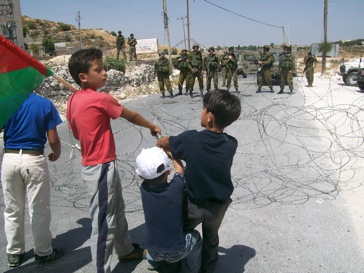 Despite this fact, the protesters managed to force the roadblock. Some were violently pushed back and threatened by soldiers. The protesters responded peacefully agitating for non-violence and democracy. One of the Israeli protesters was targeted and brutally abused for no obvious reason. The police detained him for about an hour with the excuse that he was to be transported to a hospital. Half an hour after the end of the demonstration, he was released without further consequences but badly bruised and with a possible broken rib. 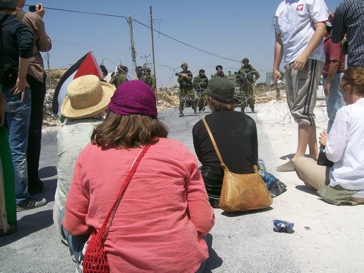 Two international solidarity activists were injured by Israeli forces on Friday in the weekly protest against the separation wall in Bil’in, west of Ramallah, and dozens of protesters were treated for tear gas inhalation.

Villagers from Bil’in marched together with international and Israeli solidarity activists after Friday prayers, carrying Palestinian flags and banners demanding the removal of the Israeli wall and settlements and calling on the international community to lift the siege on Gaza and help Palestinians retain Jerusalem. Participants also demanded that the Israeli army stop killing Palestinian civilians and end the use of live ammunition against non-violent protesters.

As they approached the separation wall, Israeli forces prevented the villagers from reaching the gate that is supposed to provide access to their lands, and opened fire on them with tear gas canisters, sound bombs, and rubber-coated metal bullets. Scores of protesters were treated for gas inhalation, and two internationals were injured by rubber-coated metal bullets.

In addition, on Thursday evening Israeli settlers raided a house built three years ago by the Bil’in Popular Committee for Resisting the Wall on the village’s land near the Matityahu East settlement. The settlers burned part of the house, which was built by the Popular Committee to help villagers maintain access to their lands and olive trees on the other side of the wall, and stole equipment from it. For the past month the Israeli army has prohibited the villagers from staying overnight in house, making it even harder for the villagers to protect their trees and equipment from settler attacks.

Also on Thursday, the Israeli army released Bil’in resident and activist Tariq Muhammad Taufiq Al-Khatib after detaining him for one week for his participation in the weekly protests.

Villagers in Bil’in have been demonstrating every week against the separation wall for the last three years. Despite the 2004 International Court of Justice ruling that Israel’s construction of the wall inside the occupied West Bank was illegal, and a November 2007 Israeli High Court of Justice ruling ordering the military to re-route the wall in Bil’in, the villagers continue to be denied access to the land on which their livelihoods are based.

To view original article, published by Maan on the 27th June, click here

More than 100 Palestinian men and boys, supported by a handful of international volunteers, held a peaceful demonstration against the Israeli separation wall in the West Bank village of Al-Khader, near the city of Bethlehem on Friday.

The demonstrators gathered for the Friday Muslim prayer in intense midday heat on a settler bypass road in Al-Khader, close to the intended construction site of the wall. Two Israeli army jeeps, an armored personnel carrier, one border police jeep, and one Israeli civil administration jeep prevented the protesters from reaching the construction site.

Local officials say the completion of the wall will result in the de facto annexation to Israel of more than 90% of the agricultural land the town depends on for its livelihood. The villagers of Al-Khader have been protesting the wall’s construction every week since January.

In delivering the Friday sermon, local educator Issa Ghneim talked about the status of Jerusalem, the occupied Palestinian capital, calling the city “the heart of Palestine,” saying that the city’s status is “non-negotiable.”

Ghneim also expressed frustration at the lack of progress in the current final status negotiations between the Palestinian Authority and Israel. “We gave more than ten years to negotiations, and still they [the Israeli authorities] did not remove one roadblock,” he said. He was referring to the network of over 600 checkpoints and roadblocks Israel maintains as a part of its occupation of the West Bank.